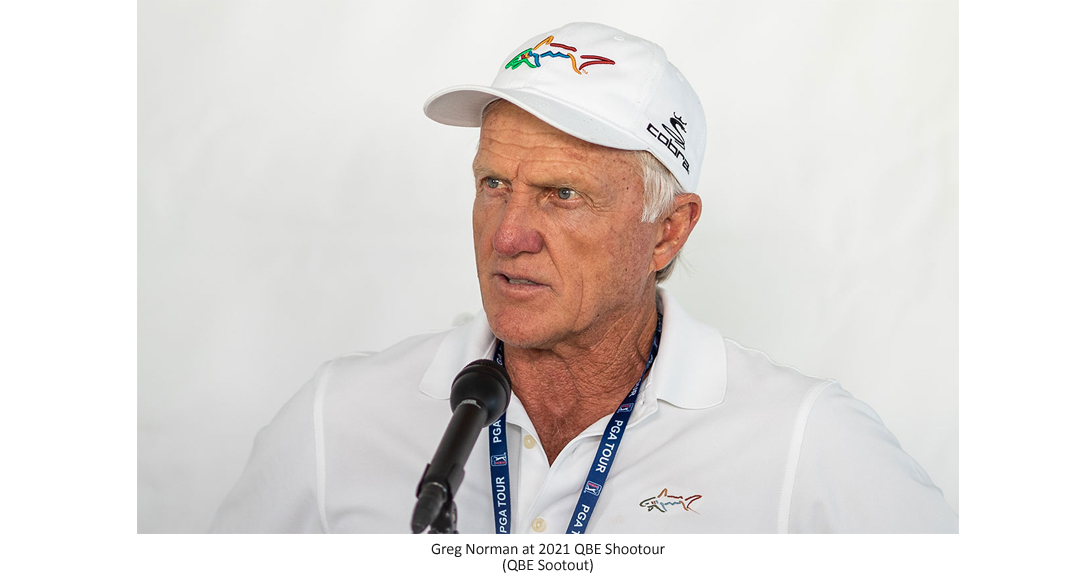 The rumors are flying fast and furious as men’s professional golf is slipping into the mud of controversy with claims and counterclaims and the situation is made even muddier since one of the claims is many top players have signed non-disclosure agreements with a proposed new tour.

Greg Norman CEO of LIV Golf Investments financed by Saudi Arabian money has announced partnering with the Asian Tour with $300 million in funding. But what really has everyone’s attention is Norman was on site for this week’s Asian Tour stop the Saudi International tournament promoting a new world professional league with players from the two long established tours, the PGA Tour and DP World Tour (formerly the European Tour).

World Golf Hall of Fame member Norman was quoted saying he and LIV Golf were “not in this a for a fight” or to compete with the two largest tours but in a comment sounding as though he may mean exactly the opposite he pointed out “nobody owns the golf space.” He complained also of being the target of unwarranted verbal attacks and that those against what LIV Golf is doing don’t know the facts. Norman has said he wants to work together with the other golf organizations.

The PGA Tour and DP World Tour have announced previously those signing with any new competitive tour would lose membership making them ineligible for the four major championships and the Ryder Cup.

One of the overriding controversies at the Saudi International and indeed the proposed LIV-backed tour is Saudi Arabia’s poor (some would say shameful) record for restricting press freedom and human rights violations.

It would be fair to point out however no details of Norman’s new tour have been disclosed nor have details of discussions with players. The Saudi International field has 21 of the top 50 world ranked players including three in the top 10, Dustin Johnson, Xander Schauffele and Bryson DeChambeau. This gives Norman lots of candidates for his pitch and to what some are speculating may be a potentially receptive group.

A few of the rumors making the circuit in addition to the supposed non-disclosure agreements include:
*Norman is talking with current stars not those approaching the end of their careers.
*Another Hall of Famer Phil Mickelson said “pretty much every player in the top 100 has been contacted at some point”.
*Englishman Ian Poulter, member of both the DP World Tour and PGA Tour, purportedly has been offered a signing bonus by Norman of $30 million.
* Mickelson perhaps as justification for his talking with Norman said in a social media post, “The media rights are but a small fraction of everything else. And it is the [PGA] tour’s obnoxious greed that has really opened the door for opportunities elsewhere.”
*DeChambeau has denied being offered $135 million to ink a deal.
*Tony Jacklin, also a Hall of Fame member, apparently isn’t against the players taking Norman’s money and wrote in The Telegraph, “The PGA Tour and DP World Tour have a monopoly on the game right now and they obviously don’t want to let that go. So we are heading into a very complex, messy situation.”

Certainly, Jacklin is correct, and it looks as though it will get much worse before it gets better. Professional golf will never be the same. The mud will splatter everybody.

Players must decide if they want to play for history…their legacy in the game, or for the money.