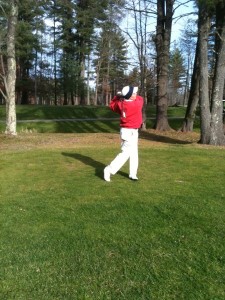 Hollis, N.H. — There’s nothing like a sun-splashed, spring-like day to get a New England golfer’s juices flowing. Especially when that day is in December.

“It’s the golf season that won’t end,” said Kerry Dolan, one of 15 or so players out for a stroll in 50-degree temperatures at The Overlook Golf Course on Friday.

Indeed, December began the way the previous month ended. Temperatures in the Northeastern U.S. were the warmest in 10 years, and the second mildest on record, according to reports.

For sure, by this time of the season in most years, duffers from Boston and points north seeking their end-of-the-season 18s must make their way to the temperate climes of Cape Cod and its plethora of world-class courses, many of which remain open year-round. Since a surprise October snow storm knocked out power across parts of New England for more than a week and sent many courses into early hibernation, however, the steadily improving weather has beckoned golfers like Dolan to fairways closer to home.

The single-digit handicapper clad in a turtleneck, sweatshirt, and ear-warming head band, joined a friend (your intrepid reporter; hey, someone’s gotta keep a close eye on course conditions) for a post-lunch round on the 18-hole, par-72 track just minutes from Dolan’s home in Nashua. When our speed golf ran into a bit of a bottleneck after the sixth hole, we skipped over to the 10th and played the back nine before doubling back and finishing Nos. 7-9. Ah, the beauty of New Hampshire golf in December: but for the inconvenience of the occasional fellow links addict, the track is yours.

Of course, New Englanders know better than to take such calm conditions for granted. In fact, forecasters have called for a colder and wetter winter than normal, according to reports. The Boston area, though, can expect mild playing conditions through Wednesday, and Overlook will welcome golfers for about another two weeks, according to general manager John McNeil.

While some nearby public and private courses, including Sky Meadow Country Club in Nashua and Butter Brook Golf Club in Westford, Mass., had already pulled the pins and rolled up the greens, officials at other venues vowed to remain open until Mother Nature forced them to close.

“Right now, we’re going to try to to go to the middle of next week,” said Craig McLaughlin, head golf professional at Candia (N.H.) Woods Golf Links, near Manchester. “It really depends on what the weather will do, but we’re going to go as far as we can.”

A healthy tee sheet boasted some 100 golfers at Candia on each day last weekend, while 50 or more golf-obsessed players roamed the grounds on Friday.

Green Meadow Golf Course, a few miles down the road from Overlook serves as something of a harbinger of the coming winter. The 36-hole Hudson, N.H., layout is always one of the first local courses to open in the spring and last to close at season’s end, and this year will be no different.

With temperatures expected to dip into the 40s by next weekend, no one took Friday’s balmy elements for granted. “It’s not often you get 50 degrees on December 2,” Overlook’s McNeil said with a smile.

For Dolan, playing hooky from her work as a free-lance writer, it just did not get any better than a quick round of golf when she least expected it.

“That’s how golf should be played,” she said, “two hours and 45 minutes in a twosome.”

As for what was on the horizon, on this day at least, the season-ending white stuff was the furthest thing from Dolan’s mind.