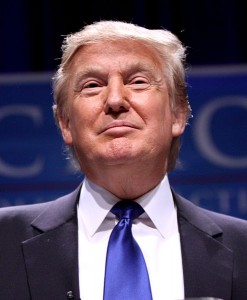 With most GOP hopefuls snubbing Donald Trump's Iowa debate, how about a golf match to determine who'll face President Obama in 2012? (Photo: Wikipedia)

As Donald Trump mulls scrapping a GOP presidential debate that has failed to attract even a foursome, perhaps a match-play tourney to determine who gets to face President Obama in 2012 would be an appropriate substitute. After all, with POTUS wannabe Mitt Romney making a campaign issue of the current Occupy Oval Office resident’s affection for a quick 18, news about Newt Gingrich’s Trump National membership making the rounds, and Rick Perry’s boastful disdain for the game, golf has already become an election theme.

Only two potential nominees — Gingrich and Rick Santorum — have accepted invitations to what sponsors are now terming a scaled-down Trump-hosted “conversation” scheduled to take place in Iowa just days before that state’s caucuses. Thanks to snubs by most of the hopefuls, the owner of 10 private golf retreats was on the verge of throwing in the towel on the session he was slated to moderate on December 27.

“I have to look into [hosting a two-candidate debate],” Trump told Fox Business Network, according to the Associated Press.

Indeed, with ex-Massachusetts governor Romney, Texas chief executive Perry, Jon Huntsman, Ron Paul, and Michele Bachmann all bowing out, those willing to duke it out in a Trump-refereed rumble had dwindled down to a mere twosome. Given the whistle-stoppers’ lack of interest in shouting over Trump’s harumphs on cable TV, a Sunday morning Nassau featuring Gingrich, Santorum, and any of the other candidates willing to lace up a pair of FootJoys, would probably garner more attention.

Should the former speaker of the house and ex-senator like to fill out the grouping, they may be able to convince at least one additional player to join the fray. Forget Romney; the Mittster wouldn’t dare step foot on a putting green after his recent tirade excoriating Obama for his links-heavy schedule. And Perry has made it clear he preferred shooting things other than little dimpled orbs (“I don’t play golf. This is my golf,” he said about his penchant for firing rifles).

But there’s always Bachmann, who may have some interest in playing a friendly round of Bingo Bango Bongo. After all, she’s been known to tee it up for a good cause, since we assume she would put her own campaign in that category.

Should the participants take their differences to the course, there would have to be some ground rules. Santorum, for example, sported a 12-handicap, according to Golf Digest’s 2011 roll call of the top 150 golfers among Washington’s movers and shakers, making him far more proficient with a 3-wood than Gingrich.

Indeed, the Faith Family & Freedom candidate would have to concede more than a few strokes to WorldNetDaily’s odds-on favorite to win the grumpy-old-white-people vote. Because while Gingrich may enjoy the privileges of membership in Trump’s exclusive Northern Virginia enclave, the Republican front-runner is apparently not much of a contender with a fairway metal in his hands.

Newt “loves the challenge of hitting a long drive and sinking a short putt,” according to his website. “He’s confident that with practice, he will someday learn the game.” Someday may be a long way off, however, since it appeared that even Gingrich’s jet-setting from one golf glam spot to another had not done much to help the 47-handicapper (as of Golf Digest’s 2005 list) harness his inner Arnold Palmer.

Gingrich’s spokesperson did little to counter that impression. “I wouldn’t call what Newt does ‘golfing,’” R.C. Hammond told USA Today. “I would say it is closer to walking with an occasional use of a golf club.”

Of course, one player Gingrich and Santorum may want to exclude from a fairways free-for-all would be Trump himself. The would-be moderator of what many party pundits worried could turn into a circus has threatened to jump back into the race if the current crop of hand-shakers continued to bore him. And with a 4.0 GHIN index, No. 17 on the 2011 Forbes Celebrity 100 could prove to be a far more formidable foe on the tee than he has been on the stump.