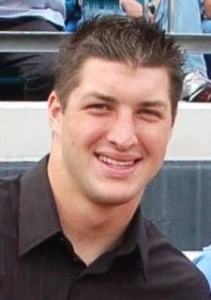 Tim Tebow Time is appointment TV -- much to the chagrin of the PGA Tour (Photo: Wikipedia)

When Golf Channel has to pitch its mega-star broadcast booth yakkers Johnny MIller and Nick Faldo (complete with “best quotes” from the duo’s less-than-scintillating play-by-play dialogue) to get people to watch the PGA Tour’s season-opener in Hawaii, you know the Tiger Woods-less field is lacking in star power — and up against Tim Tebow starring in the NFL playoffs.

Love him or hate him, any time Tebow takes the field has become appointment TV. And let’s face it — even were the lefty not once again working his magic and galloping his Denver Broncos to a stunning and sudden overtime win in the wild card showdown against the Pittsburgh Steelers on Sunday night, the Hyundai Tournament of Champions is not exactly Opening Day at Fenway. It’s difficult to build excitement for the start of a new year when there’s really no off-season — and when Woods, Rory McIlroy, Luke Donald, and most of the tour’s must-see players prefer to stay home and watch football with the rest of the country.

No offense to Steve Stricker, the 44-year-old who’s schooling 20-somethings like reigning PGA champ Keegan Bradley and Nick Watney to the tune of a five-shot lead over defending champ Jonathan Byrd and two others heading into Monday’s finale. But even Stricker’s four straight birdies to finish his third round were no match for Tebow Time over on CBS, which notched a 25.9 overnight rating — the most eyeballs to tune into a wild-card playoff game since 1988, according to reports.

Numbers for the golf event were unavailable, with ratings for the opening round due out sometime Monday, subsequent rounds Tuesday, and final round figures on Wednesday, a Golf Channel spokesperson told us.

To attract as many viewers as possible, Golf Channel and the tour even tinkered with the event’s finish, opting for only the second scheduled Monday close (Boston’s Deutsche Bank Championship ends on Labor Day) so the guys would play after the NFL did its thing. With fans back at work and the golf likely to run into college football’s BCS National Championship title bout pitting ‘Bama vs. LSU Monday night, we’ll see how that works out.

As for the Miller-Faldo match-up? They may be, as Sports Illustrated’s Alan Shipnuck noted on Golf.com, “the biggest stars” at Kapalua, but from what this sports fan observed over the weekend — during breaks in the football action — the much-ballyhooed word-play between the two was pretty much a snooze-fest.

Golfweek’s Martin Kaufman probably put it best: “If Miller and Faldo were a sit-com pairing, they would have been canceled after the second week – if they had made it out of pre-production,” he wrote on Monday. “There were no memorable exchanges, no great laugh lines, and few, if any, noteworthy insights.

“In short,” said Kaufman, “Miller and Faldo had worse chemistry than Kim Kardashian and Kris Humphries.”