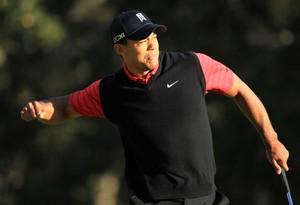 There'll be no Sunday celebration for Tiger Woods this week, as a missed five-and-a-half-foot putt on the 18th hole of his match play tilt with Nick Watney sends the former No. 1 packing (Photo: Wikipedia)

“I’m definitely in a little bit of shock,” was all Nick Watney could say after Tiger Woods missed a five-and-a-half-foot putt on the 18th green Thursday and bounced himself out of the Accenture Match Play Championship.

Watney was not alone, as Golf Channel broadcasters were rendered speechless by Woods’ stunning right-leaning short stroke that handed his playing partner the 1-up victory in the second round at the Ritz-Carlton Golf Club outside Tucson, Ariz.

After battling back from a 2-down deficit with three holes to play, Woods looked good to go to extra holes when he stuck a 9-iron from 186 yards to what used to be a gimme distance for the former ace. But his flat stick, which had let him down much of the day, missed his third putt within 10 feet over the final six holes.

For sure, everyone in the vicinity and watching from afar assumed that Watney had to hole his birdie chance from the rough behind the green to win the match. After picking up his conceded par putt, Watney even checked his yardage book as he prepared to replay the first hole.

“We all know that Tiger makes those,” Watney told Golf Channel’s Dottie Pepper after the abrupt end to the proceedings. “I feel fortunate but at the same time I’m very excited to move on.”

Woods, for whom such putts used to be automatic, acknowledged he had difficulty reading the greens Thursday and in his 1-up win over Gonzalo Fernandez-Castano on Wednesday, and knew he blew a good chance to get into Friday’s third round.

“I don’t know,” he told Steve Sands about whether Watney had won the contest or he had lost it. “I had an opportunity to force extra [holes] and something I fought all day was blocking my putts and I blocked that one right there.”

Woods planned to go home to Florida to tune up for next week’s Honda Classic and said that adjusting his errant putting stroke should be “pretty easy to fix.”

Woods joined Keegan Bradley, another early favorite to go deep into match play, in packing up his gear and heading back east. Bradley lost, 2&1, to Miguel Angel Jimenez.

In other action, Watney’s next opponent, Lee Westwood, moved on to the third round for the first time in 12 starts at this event. His prize for outlasting Robert Karlsson, 3&2, is to face the guy who knocked him out of the tourney in 2010 and 2011.

Either Westwood or Rory McIlroy, who beat Anders Hansen, 3&2, to advance to the next round, could finish the week atop the world golf rankings. With current No. 1 Luke Donald vanquished in the first round, either one of the boys from the U.K. would take over the top spot with a win on Sunday.