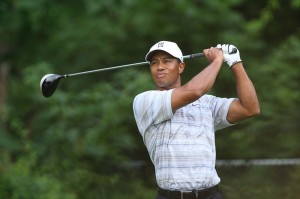 Two questions come to mind on PGA and LPGA Sunday: Can Tiger Woods remember how to stomp on his opponents’ necks and finally, at the Arnold Palmer Invitational, grab that elusive “W” he’s been chasing since late 2009? And is there anyone in the Kia Classic field who can stop Yani Tseng from earning her third tour triumph in five tries?

In Graeme McDowell, Woods, who hasn’t hoisted a tour trophy since the BMW Championship in 2009, will face a golfer on a bit of his own comeback trail and with whom he’s inextricably linked. The 2010 U.S. Open champ hasn’t won an official event since October of that year, but he came from behind to stun Woods in a playoff at the former No. 1’s own Chevron World Classic that December.

Indeed, were it not for Woods, Rory McIlroy’s Northern Irish countryman may never have gone on that magical ride in 2010. When Woods pulled out of the ‘09 Chevron after all hell broke loose in his personal life, McDowell, an accomplished European Tour golfer but not well known in the U.S. at the time, took his place. He won three times in 2010 and found himself back where it all started for him, at Sherwood Country Club.

That Sunday, McDowell came from four shots back to beat Woods in overtime. Today, he’ll tee it up with “just another guy that I’ve got to go and try and beat,” McDowell told reporters Saturday after posting a 1-under 71 to sit one stroke back, at 10-under.

“Looking back to the Chevron, I managed to make a couple nice bombs on him on the last green,” he said. “It’s fun to do to Tiger what he’s done to other players and what he’s done a few times in the last round here at Bay Hill.”

Recalling a challenge he issued via Twitter prior to that event, McDowell repeated, “Bring it on.”

As he noted, each golfer has something to prove, although most observers will be keen to see if Woods can complete his comeback from off-course issues, his swing overhaul, and a slew of injuries. “There’s certainly going to be expectation and pressure on him tomorrow, as there is on me,” McDowell said. “I’m looking forward to it. I’m excited. It’s the start of hopefully a great spring, summer for me.”

Woods, who rallied back from a double-bogey six on the 15th after a mishit off the tee Saturday (midway through Woods’ downswing, a woman yelled in reaction to a young man fainting at a concession stand) lobbed back McDowell’s serve. “I’m just looking forward to it. It’s going to be fun,” he said. “Graeme and I, we enjoy playing together and it’s going to be a fun pairing.”

Fun, shmun. The golf world will tune in to see if Woods can finally get off the schneid or if he’ll become one of so many players this year who have gone into Sunday ahead only to finish the tourney looking up at the winners. A confident-sounding Woods said it was different for him than it was for the 20-somethings who have coughed up the leads this season.

“Whether it was Kyle [Stanley at the Farmers Insurance Open] or it was Charlie [Wi] at Pebble [Pebble Beach National Pro-Am],” Woods said, “they are guys looking for their first wins.”

Woods, who’s stalking his 72nd tour victory, used to know how to get it done as the front-runner. His record is 48-4 when he starts a Sunday with the edge, according to PGATour.com’s Larry Dorman. But, as Dorman noted, he’s only two for five when he’s been in that position most recently.

Meanwhile, on the women’s tour, there’s Yani Tseng and everyone else. The top-ranked golfer put up a respectable 3-under 69 on Saturday to get to 12-under and take a three-shot advantage over former No. 1 Jiyai Shin at La Costa.

In a tune-up before next week’s first major of the year, the Kraft Nabisco Championship, the 23-year-old is on the verge of her 15th career tour win after posting the eighth sub-70 round in her last nine attempts. Tseng, who has continued her dominating play from last year — when she won 12 times worldwide, seven times on tour, and became the youngest golfer win win five majors — even recorded a 370-yard drive (thanks to some help from the cart path and a bridge) on the 18th hole.

Still, Tseng could have made Sunday’s round a mere formality had she not missed four makeable birdie putts. “Overall with my round I just wasn’t happy,” she told reporters. “I couldn’t believe how much short putt I missed out there.”

Despite the missed opportunities, the odds are on Tseng to close the deal. In the 11 events in which she has held or shared the lead heading into the final round, Tseng has won six times — and that includes the 0-for-4 she put up in 2008 and 2009, her first two years on tour. Since then, however, she’s batting .857 (6 for 7) and going for her second win in a row after shooting a final-round 68 to win last week’s Founders Cup.

As with Tiger, “fun” was the operable word for Yani.

“I’ll play with Jiyai,” she said. “We’re good friends, so I think we’re going to have lots of fun on the golf course and try to beat each other.”