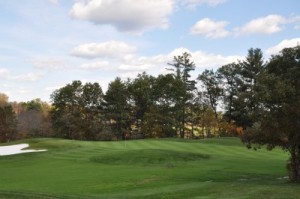 Launching a new golf course is almost unheard of these days. After all, the National Golf Foundation reports that supply of tracks will continue to outpace demand for the foreseeable future. Indeed, almost 160 U.S.-owned 18-hole operations shut down in 2011, compared with 19 openings, an unfortunate trend that has seen almost 360 clubs close since the market’s peak in 2005.

Which is why, some two months after ownership of Shaker Hills Golf Club in Harvard changed hands via foreclosure auction, and Athol’s Ellinwood Country Club filed for chapter 11 bankruptcy protection, the opening of a new club in Massachusetts is big news in the golf world. Cold Spring Country Club will buck the economic tide when it welcomes daily-fee golfers on June 1 (the club will open to some 100 members on May 1) to its central Massachusetts fairways in Belchertown.

As it has been worldwide, course closures and auctions have been the norm across Massachusetts for the past few years, with Hickory Ridge CC the most recent facility to come under new ownership. The Amherst circuit is slated to re-open soon under new management and, reportedly, a new name — Hickory Ridge Golf Club, according to the Springfield Republican.

In the meantime, the economy has kept new course openings at a virtual standstill, with The Ranch GC in Southwick and South Hadley’s Ledges GC  in 2002 the most recent new properties to appear on the central/western Massachusetts scene.

The poor economic climate has had much to do with the delays in the opening of 260-acre Cold Spring, a project that started during the golf-industry boom but that carries a checkered financial history. The first two developers of the former apple orchard ran into legal and money problems beginning in 1997, which, according to the Springfield Republican, delayed construction off and on for 12 years.

Qianlong (USBoston) LLC bought the partially built facility for $2.3 million from Southbridge Savings Bank in 2009 and planned to open by June 2011. The Republican reported that the company decided to wait for the fairways to be in better repair and the clubhouse to be finished.

With that work slated for completion by June 1, head pro Bill Tragakis said the owners were “really excited” about offering a quality product with “fantastic” playability reminiscent of some of the finer Massachusetts courses.

“What they’re putting into the golf course will make it a beautiful facility,” Tragakis, who began working at Cold Spring six weeks ago after more than a decade in the employ of Beverly Golf & Tennis Club and Hampden CC, told us Monday. “It reminds me a lot of [Bernardston’s perennial award-winning] Crumpin-Fox Club.”

With record warm, dry weather to start the 2012 Massachusetts golf season, and rounds played finally on the increase, according to NGF, the Armstrong Golf Architects-designed Cold Spring may be launching at the right time. Indeed, Tragakis predicted golfers from Boston and all over the state would descend on his course to the tune of 25,000 rounds in the club’s abbreviated first year.

The 18-hole, semi-private course will play from 6,521 yards from the tips and offer five sets of tees on its par-71 circuit.

As for Ellinwood, the 18-hole course remains open as it navigates the voluntary petition for Chapter 11 protection that it filed on April 10 in U.S. Bankruptcy Court in Worcester. Ellinwood’s attorney, Holly Hines, confirmed to us that the club has some $1.7 million in assets, consisting largely of real estate.

“The course is still open and the intention is to continue to operate [as it reorganizes under Chapter 11],” Hines said Monday. She noted that the owners wanted “everyone to know that Ellinwood Country Club is still open for play and looking for more memberships as they go forward.”

Ellinwood’s president echoed Hines’ sentiments. “We’re just trying to get through a tough period that’s happened over the last few years because the economy’s bad,” Frank Condino told us Tuesday. “Instead of closing up, we’re trying to save [the course].”

Judge Melvin S. Hoffman will hold a conference on May 3 to determine the status of the reorganization plan for the Donald Ross- and Geoffrey Cornish-designed 18-hole course. Ross built the first nine holes, which opened in 1929, while Cornish architected the additional nine.

Shaker Hills’ new owner, Fred Curtis, meanwhile, may be in for a quick primer on the headaches associated with course ownership. The property reportedly requires a completely new irrigation system and other work that could cost as much as $1.5 million. That’s on top of the $3.4 million Curtis paid for the course, which, according to one would-be buyer and current course owner, was far too much for the 21-year-old track that had fallen into disrepair as its previous owner fell into debt.

In fact, once the bidding in Thursday’s auction got beyond about $2.3 million (Middlesex Savings Bank held a $2.13 million mortgage on Shaker), this owner noted, those with hands-on course operational experience dropped out of the race. It was then essentially a two-person contest between Curtis, who works in commercial real estate, and Brian Lafferty, a representative of Colonial Automotive Group.

Lafferty’s company may be among potential buyers if Dracut’s Meadow Creek GC makes it to its scheduled May 1 auction. Colonial Automotive, Lafferty told us, was runner-up as well in the foreclosure auction sale to the Jan Companies., which bought Sterling National CC two years ago.