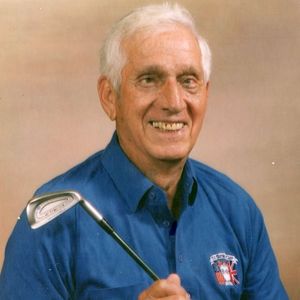 Joe Lazaro may not be as recognizable a name as Tiger Woods in the annals of the game, but the seven-time national blind golf champion who died on December 25 at the age of 95 certainly caught the attention of the world No. 1.

Lazaro, who once challenged Sam Snead to a match, met Woods in 2006 during the pro-am portion of the Deutsche Bank Championship.

It was not surprising that Woods, a life-long student of the history of the sport he dominates, should be acquainted with Lazaro, whose narrative was legendary. As a teenage caddie at Weston (Mass.) Golf Club, years before a German land mine took his eyesight in 1944 during World War II and hospitalized the then-26-year-old for 13 months, Lazaro learned to play golf by watching others swing.

The Waltham, Mass.-born Lazaro returned to civilian life, married his war-time sweetheart Edna, and went to work for Raytheon until his retirement 39 years later. Heeding the suggestion of a sports advisor during his rehabilitation, he took up the game again in 1950, with the aid of one of several coaches who helped him over the years.

“Golf is a team game,” Lazaro said upon induction into the inaugural 2007 class of the U.S. Blind Golf Association’s Hall of Fame.

Lazaro earned such an accolade by becoming one of the greatest visually challenged golfers in history, playing in more than 50 Blind Golf Association championships and winning seven national and two international titles.

“I tell you it was wicked,” he recalled for the Globe in 2008 about his immediate return to the links so many decades earlier. “You lose your equilibrium, and when you swing, you fall off your feet. You’ve got to develop equilibrium.”

Achieving that and so much more, Lazaro captured the New England PGA’s “Man of the Year” honor in 1980 and what he termed his crowning achievement, the Golf Writers Association of America’s 1970 Ben Hogan Award, proffered annually to to an individual who remains active in golf despite a physical handicap or serious illness.

It was during a previous GWAA banquet that Snead proposed a golfing duel and Lazaro accepted — under one condition.

“We were sitting together at the golf writers dinner in 1962 and Sam was the guest of honor,” Lazaro told the Wilmington Morning Star in 1984. “He told me he’d like to play against me some time. I said, ‘Okay, we’ll play and we’ll bet. You can even name the golf course if I can name the time.’

“He said, ‘Let’s play at my course in South Carolina,’” Lazaro recalled. “I said, ‘That’s fine with me. We’ll play at midnight.’”

Lazaro, whose best score in competition was 77, leaves his widow, three children, and a brother.

“When I started in blind golf, I did it for the enjoyment of competition,” Lazaro said after receiving the GWAA honor, according to the Globe. “I never thought it would lead to such wonderful things as this.”

Memorial donations may be made to the Newton, Mass.-based Carroll Center for the Blind.