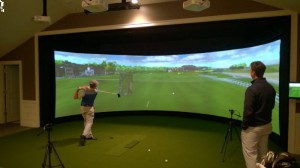 Temperatures are climbing in New England, but with snow banks still six feet high in some areas hit hardest by Snowmageddon 2015, it will be several weeks before many golfers in the northern part of the six-state region can hit the links.

In the meantime, weather-weary New Englander golfers may take their frustrations out — and get in a little spring training — on indoor golf simulators. This particular corner of the northeast is flush with facilities where you may take lessons, practice your swing, and play full rounds while giving each club in your bag a workout.

The idea is simple, even if the underlying mechanics would make a techno-geek’s head spin. Essentially, sensors installed in a mat track data on an almost countless number of factors, including backspin, side spin, ball and club speed, angles of attack and trajectory, and carry and total distances.

The system — whether it’s powered by aboutGolf (as is the simulator at Manchester CC, Bedford, N.H.), HD Golf (Par97, Georgetown, Mass.), or Optronics’ Par T Golf (Pappas Golf & Baseball, Chelmsford, Mass.) — projects each shot onto three-dimensional facsimiles of iconic courses around the world.

“Three projectors blend images together for an IMAX-type viewing experience,” head professional Todd McKittrick told us on a recent visit to “The Attic,” Manchester CC’s new facility on the second floor of the clubhouse. “You’re actually seeing what the golf course looks like.”

Manchester, a private club that offers the simulated-golf experience to members and their guests only, built the space specifically to house its aG SimSurround PGA Tour Curve. Membership has its privileges, and the ability to take advantage of the 39 courses represented on the nearly 24-foot screen with panoramic, 160-degree wrap-around images is certainly one of them.

Birds chirping and wind whistling across the Old Course immerse players fully in the ambience of St. Andrews (or 38 other tracks), while a fly-over view of the track is incredible, if dizzying.

The 92-year-old club has been booking tee times (at $50/hour) since unveiling the simulator during February’s deep freeze, when spring seemed an impossibility. McKittrick believes the system will continue to attract members even after the crocuses bloom and robins are warbling on actual fairways.

“We’ve all been sitting out there staring at the frozen flag and the hole. We can’t wait for it to thaw,” he said. “But we envision this being used even in the summertime — waits on the tee, rain delays, practice time.”

Of course, you don’t have to join a country club to enjoy the benefits of indoor golf. And if you’re partial to pizza, beer, and chicken wings along with your birdies and eagles, Par97 is the place.

But beware. While you’re testing your skills in one of seven hitting bays featuring 22 courses that include popular PGA Tour stops like Pebble Beach, Spyglass, Torrey Pines, and Pinehurst No. 2, you may be distracted by the menu that offers 12 draft beers, 18 flavors of wings, and 97 pizza creations (we dare you to suggest a combination co-owner Brandon Clifford does not already serve).

Brandon and his father, Terry, opened Par97 in January 2014 and the six 12-foot flat screens ($35/hour weekdays, $44/hour Friday-Sunday) and one 16-foot curved screen ($48 and $60) provide golf action as authentic as any indoor venture available.

A few miles south down I-495 of the Georgetown site is Pappas Indoor Golf & Baseball. Long-time golf instructor and jazz pianist Bill Pappas is an institution in Massachusetts’ Merrimack Valley and the owner of one of the first indoor golf sites in the country.

The establishment opened in1988 and provides golfers in three hitting bays with more than 200 global layouts. The warehouse-sized structure in Chelmsford may not be the most modern of buildings, but Pappas updates the simulators regularly and prides himself on being the indoor-golf industry’s Cheers — where everybody knows your name.

“A lot of the same people we’ve had for years,” said Pappas, who charges $40 per hour.

“Putting into an actual hole,” said Judy Apkin, who has played indoors at Pappas, Par97, Manchester, and OptiGolf (Middleton, Mass.), “makes the putting much more realistic.”

The beauty of places like The Attic, Par97, OptiGolf, and Pappas (and the nearly countless other simulators throughout the region) is you can play a round at your convenience — no matter what Mother Nature has in store.

“It fits to your schedule. You don’t have to worry about if it’s raining outside, if it’s snowing outside, if it’s day if it’s night,” said Par97’s Clifford. “When you want to come and do the things you love — whether it’s pizza, beer, wings, golf, you come here and do it on your own time.”

“It’s a great way to keep one’s swing fresh during the off-season,” she said, “as opposed to hitting into a wall and guessing how far you might have hit the ball.”