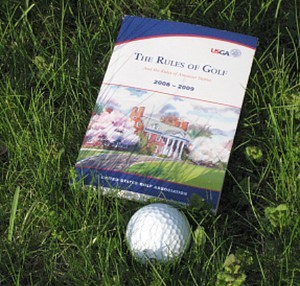 Should Webb Simpson lose the PGA Tour Player of the Year race by an eyelash, he may look back at the final round of the Zurich Classic of New Orleans and wish golf’s powers-that-be had not waited so long to change a rule.

In a move they said they were working on for four years, the Royal & Ancient and USGA will no longer penalize players whose golf balls move after address “when it is known or virtually certain that they did not cause the ball to move.” A gust of wind causing the ball to oscillate after the player has addressed the ball, for instance, is no longer a punishable offense.

Simpson, who lost the tour money title to Luke Donald on Sunday at Disney, could have secured the first of what would have been three wins this season had his ball not wiggled on the 15th green of the Zurich finale in May. Who knows if Simpson would have gone on to win, but for sure he was not amused by the nonsensical edict, which at the time he called “such a bad rule.” As it happened, officials assessed Simpson a one-stroke penalty, he finished in a tie for first, and lost in a playoff to Bubba Watson.

Reigning U.S. Open champ Rory McIlroy accrued the same penalty during the final round of the British Open, although with far less serious results than Simpson, as McIlroy finished 25th.

Three-time major winner and R&A ambassador Padraig Harrington hailed the decision by golf’s governing bodies. “Every time the wind blows, I am worried that my ball is going to move and I am worried about grounding my putter, distracting me from trying to hole my putt,” Harrington said in a statement.

In another rules change, players may now “smooth sand or soil” in a hazard before hitting “provided it is for the sole purpose of caring for the course” and does not breach Rule 13-2 (“improving like area of intended stance or swing or line of play”).

A contestant may now also be five minutes late to an assigned tee time without facing automatic disqualification from tournaments. Rather, a golfer would lose the first hole in match play or two shots on the first hole in stroke play.

Finally, grounding the club now refers to whenever golfers place their clubs “immediately in front of or behind the ball,” with no regard to whether they have actually taken their stances. Before the rules change, a golfer took an address position by standing over a ball and grounding a club.

Harrington believed the changes were a boon for the game.

“I am delighted with the changes, in particular the ball moving after address,” he said. “This change will speed up play, there won’t be as many suspensions and players won’t be getting penalized or disqualified unfairly. It is definitely giving us players a little bit of a break.”