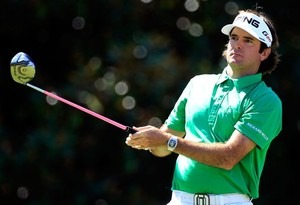 Bubba Watson says he's no fan of the Blue Monster at Doral but he fires a career-tying low round of 62 to take the lead at the WGC-Cadillac Championship (Photo: PGATour.com)

For a guy who expressed extreme loathing for Donald Trump’s Doral Golf Resort, Bubba Watson did a pretty good impression Friday of a golfer who showed no fear of the fabled Blue Monster.

“You know, this golf course doesn’t really suit me,” Watson told reporters after firing a second-round 10-under 62 to tie his career-best round and take a one-shot lead heading into the weekend at the WGC-Cadillac Championship. “My eye lines ‑‑ it’s tough. It’s tough for me.”

The other 73 players in the no-cut tourney probably wished it were as tough for them as it was for Watson, who tallied nine birdies, an eagle, and one bogey on a day when a host of golfers went low. Indeed, one of those competitors, who was likely wondering how he managed to pedal as fast as he could and still end up going backwards, was Tiger Woods.

The headline on Woods’ website told the tale of a contestant who hit 14 greens in regulation in a bogey-free second round but was seven shots back instead of the five at which he started the day: “Woods loses ground at Doral despite 5-under 67.” Bouncing back from an opening-round 72, Woods matched scorecards with PGA champ Keegan Bradley and a slew of others whose 5-under rounds just weren’t good enough to catch Watson. For sure, Bubba from Bagdad leapfrogged everyone to get to 12-under and take a slight edge over his playing partner, Justin Rose (8-under for the day).

“Just one of those things,” said Watson. “I’ve been hitting the ball really well, carried over, made some putts today.” (Twenty-three, to be exact.)

The big-hitting southpaw described his nearly flawless round, indicating several times how the course did not suit his penchant for bending shots.

“No. 4 is a tough hole for me, with that wind coming across, bunkers in the water, trying to slice one against the wind is pretty tough for a lefty,” Watson said. “So I hit too much club almost in the water and chipped it to about 15 feet and made bogey there.”

On the par-4 sixth, he sliced his drive and ended up some 136 yards from the hole but behind a tree. Watson opened up the face of a 9-iron, aimed some 40 yards right of the green, and “sliced it out of the rough” to about eight feet and an easy birdie.

“Who does a draw up that way?” Watson wondered aloud, adding that, “The sad thing is I could see that in my head.”

Rose agreed that no one could bend it like Bubba.

“He hit a tee shot on three that was in the water all day long,” said Rose. “Started in the middle of the lake…it was 30 yards from the water by the time, where his ball landed eventually. His ball was actually safe all the time, but the line he took, it was just something like, oh, it’s dropping, no, he’s got a flip wedge in his hand.”

Despite a day when his game could do no wrong, Watson said he was in a constant battle with himself to slow down and focus on the task at hand. Still, it seemed Watson’s real enemy was the Blue Monster

“I still don’t like this golf course,” pronounced the 36-hole leader of the pack.