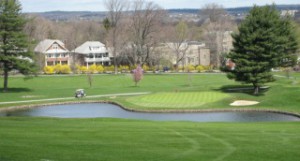 Phil Mickelson may have so far escaped charges of insider trading but a band of Boston golfing pals and Lefty wannabes has not been so fortunate.

A couple of the best amateur players in Massachusetts, whom federal investigators termed members of the “Golfing Group,” were charged Thursday with allegedly making more than $554,000 in illegal profits from trading on inside information about a Bay State technology company.

Indeed, Eric McPhail, listed on GHIN.com as a member of Oakley Country Club in Watertown, may have conspired with two elite golfers and four others to break the law and rake in far more than your average Sunday morning Nassau tourney is likely to yield, according to the Securities and Exchange Commission.

McPhail, a low single-digit handicapper, repeatedly shared non-public data gleaned from an American Semiconductor Corp. executive and fellow Oakley member with his six compadres, according to the SEC. Between 2009 and 2011, McPhail allegedly provided information about pending corporate developments, including expected earnings and contracts, according to the complaint filed in federal court in Boston.

McPhail frequently provided the ill-gotten information on the course, over drinks, and via email to his pals, who included reigning Massachusetts Golf Association player of the year Douglas Clapp, 47, of Walpole, and James “Andy” Drohen, 42, of Granville, 2003 Massachusetts Amateur champion.

“Try this one…AMSC…watch it July 30th,” McPhail allegedly wrote in one of his first emails, according to the Boston Globe, which cited the SEC filing and reported McPhail followed up by confiding that, “Now is a good time to buy from what I am told. Depending on how the market does that day, maybe a 20% jump that day?”

Clapp expressed his enthusiasm by footing the bill for an upcoming golf outing.

“Wow!! When do we get out? Eric [the golf tournament] is on me,” Clapp wrote, according to the filing. “No need to bring your checkbook.”

Others involved in the scheme that the complaint charges violated federal anti-fraud laws and the SEC’s anti-fraud rule, were Douglas Parigian, 55, of Lowell; John Gilmartin, 43, of Andover; Jamie Meadows, 40, of Springfield; and Drohen’s brother, John, 44, of Cranston, R.I.

The SEC seeks to have the Semiconductor Seven return their fraudulent earnings with interest and pay financial penalties up to three times their gains. Gilmartin, Clapp, and the Drohens agreed to settle, without admitting or denying the allegations, by consenting to the entry of judgments permanently enjoining them from violating the relevant securities laws, according to the SEC.

Mickelson, ICYMI, contends he has done “absolutely nothing wrong” and is cooperating with federal agents investigating potential insider trading charges that apparently do not involve the defending champion of this week’s British Open.