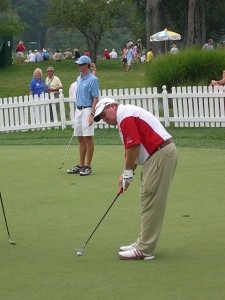 John Daly's withdrawal from the Australian Open may not have been quite so dramatic as reports would have you believe (Photo: Wikipedia)

John Daly may have been a little “hot under the collar” before he quit in the middle of the first round of the Australian Open on Thursday, but he did not leave the course in a huff or make a scene of any kind, according to a fan who witnessed the episode.

“He didn’t throw any clubs, he didn’t swear, he certainly didn’t abuse anyone,” said Steve McClure, a Sydney resident and die-hard Daly fan who took exception to the dramatic headlines following the incident. “He didn’t storm off or throw a tantrum, he didn’t cause any harm to the game.”

Tourney organizers said they were “bitter and disappointed” after Daly sent half a dozen golf balls into the drink on 11, shook hands with his fellow competitors, left the course, and drove away in a courtesy car, according to multiple news reports.

“It’s very disappointing and certainly unprofessional,” Aussie Open director Trevor Herden told reporters about the most recent erratic behavior from Daly, who’s no stranger to controversy on or off the course. “I’m extremely bitter and disappointed that he’s treated this championship this way. It’s becoming a bit of a habit and I certainly hope that all the tours deal with it in the appropriate manner this time.”

“We love to see that,” said McClure, a self-described everyday golfer who envies Daly’s prodigious length off the tee. “We’re happy to watch a golfer who can still do that.”

When players and spectators reached the green, Daly expressed surprise that his ball had come up short of the putting surface. He proceeded to hit a ball from the bunker in front of the green, noticing when he bent down to mark it that it wasn’t his. It was then Daly discovered his tee shot had landed in the sand in back of the green and that the ball he hit was a stray from the practice range to the left of the 10th fairway.

Daly called an officials over, told him of his error, and incurred a two-shot penalty. After knocking the correct ball close to the pin, he lipped out his first putt and missed the come-backer, carding a triple-bogey and moving to 7-over for the tournament.

An “obviously aggravated” Daly hit his tee shot on the par-5 11th close enough to have a go at the green, McClure believed. That didn’t happen, as the golfer plunked “six or seven” balls in the water, “walked out and shook the hands of Parry and the caddies…and was out of there,” he said.

“He wasn’t rude, he didn’t swear, he didn’t throw his club,” McClure said. “He just walked off to the administration area.”

Even one of his fellow competitors believed Daly deserved better treatment after the episode, telling reporters, “I am defending him. He had no golf balls left. That’s why he walked off. I do [have sympathy for him],” said Parry.

“I like John. I think when he comes out here he does try his best. He’s a very pleasant guy. He doesn’t carry on, doesn’t swear,” Parry said, supporting McClure’s version of events. “In hindsight, [quitting] probably wasn’t the right thing to do but he had the right club and was trying to do what he thought right.”

McClure, who said he rooted for Daly because of the player’s accessibility, was disappointed in the golfer’s withdrawal. He also believed PGA of Australia officials overreacted when they withdrew Daly’s invitation for next week’s Australian PGA Championship. Herden’s remark that, “I would say this is the last time we see John Daly at this tournament,” was over the top, as far as McClure was concerned.

“I don’t know whom he’s talking for. I think people do like to see him,” said McClure, who added that fans enjoy the everyman quality that Daly brings to the game.

“Everyone loved that scene [in “Tin Cup, when the caddy kept throwing ball after ball to Kevin Costner’s character, Roy McAvoy] because we can identify with it,” he observed. “And we can identify with John Daly, although  Daly has what we don’t have — natural ability.”

As the ball count mounted for Daly on 11, some fans began to chant, “‘Hit another one, John!’” McClure said. “Australians love being hecklers, but in a good-natured way.”

While the powers-that-be may have had enough of Daly’s antics, McClure would welcome his return Down Under.

“Yeah, I’d like to see him back in Australia,” he said. “People do really like him and enjoy him out here.”