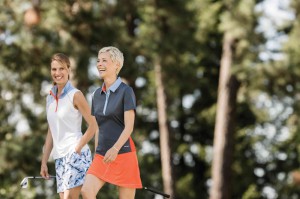 True to its Pacific Northwest heritage, Cutter & Buck says the inspiration for one of three new deliveries in its ANNIKA Collection for Spring 2014 is the stately Paramount Theatre, which opened 85 years ago in downtown Seattle.  At that time, The Seattle Times called the facility a “magnificent cathedral of entertainment.”

Staying with that theme, Jake Rawson, Cutter & Buck’s global director of sales for golf, said the company is looking for an encore performance with the ANNIKA Paramount delivery as well as two others – Studio and Dynamic – in what amounts to a more sporty, athletic, fresh collection that features a stunning color palette.

Seattle-based Cutter & Buck is one of the more successful apparel companies – men’s and women’s – in the golf market today. The ANNIKA Collection, named for World Golf Hall of Famer Annika Sorenstam, is a consistent performer in the women’s apparel market.

Here is a closer look at the three deliveries in the Spring ’14 ANNIKA Collection:

• ANNIKA Studio:  With hints of red in the striping, the line’s colors are Chic Lime (yellow green), Wisp (greyed aqua) and Force (navy).