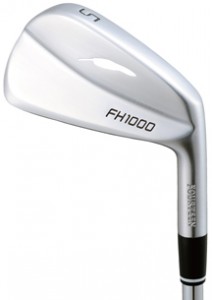 There is nothing like the look and feel of classic forged blade. Fourteen Golf, which has quietly been making a name for itself in the wedge market the past few years, is now coming with its first line of forged blades – FH-1000 FG forged irons.

The irons, which feature what Fourteen Golf calls a “Reverse Muscle Back Design,” are aimed primarily at professionals and low handicappers. That’s a small market to crack for a small company, but Fourteen Golf is counting on its successes in the professional ranks, particularly on the LPGA and developmental tours, as its foot in the door.

The Reverse Muscle Back Design in the FH-1000FG forged irons, according to the company, provides stability in the club head movement. The upper blade portion is slightly thicker with additional weighting distributed on the upper part of the club head, as well.