TaylorMade-adidas Golf will follow up its SLDR driver launch of two months ago when it begins shipping SLDR fairway woods and Rescue clubs on Nov. 15.

Similar to the SLDR driver, TMaG says each club combines a low and forward center of gravity placement wherein weight is re-located to the front of the head to promote faster ball speed, a higher launch angle and a lower spin-rate.

The company also says its research shows the SLDR fairway to be the longest adjustable fairway wood in company history. Perhaps so, but you wouldn’t expect TMaG to say anything else.

TMaG says each SLDR fairway (suggested retail price $249) and Rescue club (SRP $219) features the company’s Speed Pocket. As seen in the RocketBallz metal wood and in the RocketBladez irons, TMaG says the Speed Pocket increases face flexibility to promote faster ball speed. Unlike the previous RocketBallz metal wood line-up, which had an open slot on the bottom of the club head, TMaG says the SLDR has a “more efficient” Speed Pocket design featuring a polymer fill to keep grass and debris out of the pocket.

In addition, SLDR fairways and Rescue clubs each have TaylorMade’s Loft-Sleeve technology that allows golfers to adjust the loft 1.5 degrees up or down to dial in their optimal launch conditions. In the past, better players have been reluctant to play higher lofted metal woods because of an increased spin rate. TMaG, however, says the new low-forward CG location dramatically reduces spin and results in greater distances with higher lofted clubs. 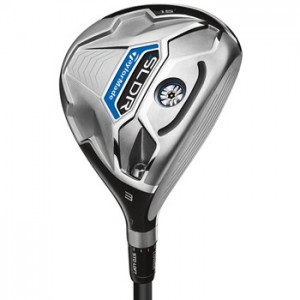