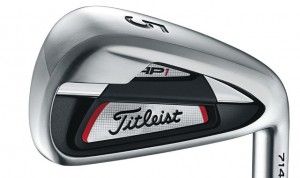 Blocking and tackling are fundamental parts of football.  They’re the foundations of a good football team.  Dan Stone, Vice President of Titleist Golf Club research and develop for the Acushnet Company, calls the mixing of heavy and light materials the “blocking and tackling” components in the new Titleist AP1 and AP2 (714) irons that will be in retail stores and pro shops on Nov. 8. Players who want to get a head start can now get custom fit for either model at a certified Titleist club fitter.

The new AP1 irons, according to Stone, are the longest, most forgiving irons Titleist has ever made, with a multi-material, dual cavity design for distance, forgiveness and feel.  The new AP2 models are multi-material forged irons that Stone says offer distance with trajectory control and forgiveness with workability and a solid feel.

The tungsten weighting and manufacturing technologies, Stone said, make AP1 and AP2 the most forgiving irons in the game at the head sizes and blade lengths preferred by serious golfers. The high density tungsten weighting in the long and mid irons in each model, according to Stone, help produce a higher MOI (moment of inertia), increasing the speed on missed shots to provide consistent distance without sacrificing workability or shot control.

“We found the best technology for us right now is mixing heavy and light materials,” Stone told me. “This is really kind of blocking and tackling – taking advantage of steel, which is 7.8 grams per CC and the tungsten piece, which is 17 grams per CC.  A lot of people don’t understand that we’re the only (company) that can do that tungsten-type of weighting in irons. Others kind of steer away from that because of the cost.

“A lot of technologies come and go but we would like to make sure the technology we come out with actually works. We know that this works. It’s a very solid way to drive inertia and also keep our CG (center of gravity) in a place where our competitors can’t get to.”

That’s particularly true in the long irons of each model.  The tungsten weighting in the long irons makes them easier to hit than in the past, so much so that it’s a pleasure once again to pull out a 4-iron instead of going with a hybrid or high-lofted fairway wood.

“We think with the tungsten weighting we’ve made the long iron category much more competitive,” Stone said. “We want to make it so if player wants an iron, we want to give him best in that category.”

And that’s what Titleist delivers with the 714 series AP1 and AP2 irons.