Tour Edge Golf has done iron-woods as well as any company in the industry, so it’s set the bar high for its new Hot Launch iron-wood model.

To reach that bar, Tour Edge says its engineers enhanced the Hot Launch by increasing the volume of the club head to achieve more forgiveness. The larger head size, according to the company, allowed more weight to be positioned low and farther away from the face, allowing the Hot Launch to hit higher, straighter shots. 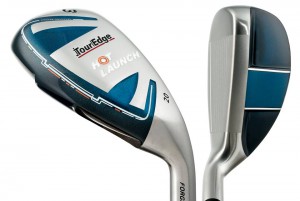 From the face to back, the depth of the Iron-Wood heads are also more progressive. Tour Edge says the longer irons are deeper, and shorter irons feature a thinner sole width similar to a standard iron. The shape changes, according to Tour Edge, improve the visual aspect of the clubs, and make them our easiest to hit Iron-Wood yet.

In addition, Tour Edge says its engineers drastically modified the design of the iron-wood face for added distance and more forgiveness. The forged maraging steel face, Tour Edge says, is larger and unsupported inside the hollow hyper steel body. The face also includes variable face thickness to ensure that hits on all areas of the face launch down the fairway and on to the green. The heavier steel sole and hollow body combination, according to the company, increases launch angle and forgiveness on every shot.

Hot Launch iron-woods are available in Hot Launch proprietary graphite shafts and sold individually or as a complete set, available in 2 hybrid-LW. Suggested retail is $79.99 Individually and $499.99 for a set of seven.