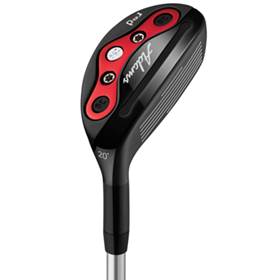 Adams Golf says its engineers found new ways to innovate in the hybrid category, adding features that allow Red to meet the demands of golfers everywhere.

Unlike many larger hybrids on the market, the Red Hybrid features a smaller head (95cc) that the company says can handle a wider variety of difficult shots and make them easier to hit from all conditions.

Adams says its upside-down head design brings the CG (center of gravity) lower, promoting easier launch and greater demand from all lies and increasing playability. The Red also features the company’s familiar Velocity Slot Technology on the sole and Ghost Slot Technology on the crown. In addition, the Red Hybrid has three transferable weights on the sole (one 25g & two 2g) that can be configured to promote the flight that works best.