John A. Solheim always has an eye for detail. That’s evidenced in every Ping golf designed in the past 20 years, including the new Ping G driver. According to Ping Golf, a close-up photograph of a dragonfly taken by Solheim – Ping’s chariman – was the inspiration for the primary innovation in the driver. 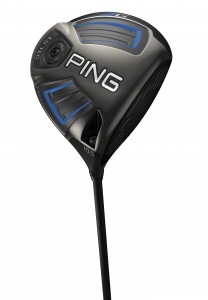 Solheim was intrigued by the wing structure and shared the photo with a group of engineers. Inspired by biomimicry, an approach to innovation that emulates nature’s time-tested patterns, they created Dragonfly Technology. The complex exoskeleton design, according to Ping, yields its thinnest (0.43 mm) and lightest crown to date, saving eight grams while creating an intricate and stable structure. The weight savings helped drive the center of gravity lower and deeper than any Ping driver, increasing dynamic loft and elevating MOI (moment of inertia) significantly for maximizing distance and forgiveness.

According to Ping, its engineers also studied the base flaps that minimize large-scale vortex shredding behind 18-wheel semi-trailers and integrated their learnings into the G drivers to improve aerodynamics and increase speed. Vortec Technology on the back of the club and turbulators on the crown contribute to reducing drag 37 percent in the impact zone, yielding greater

Club head speed and ball velocity for measurable distance gains from all swing speeds. The

Golfers can optimize launch conditions prior to a round by adjusting loft up to +/– 1º with five settings utilizing a lightweight, aerodynamically efficient and high-strength 7075 aluminum hosel sleeve.

The G SF Tec driver, according to Ping, is custom-engineered with weight closer to the heel to produce a right-to-left shot bend (for right-handed golfers) and steer the ball back into the fairway. The G LS Tec driver features a CG (center ot gravity) that is extremely low (slightly forward of the standard G driver), for the player who desires low, stable spin with forgiveness.