What’s Ping Golf’s encore for its popular G30 driver? The G400, which the company says is its “fastest and most forgiving’’ driver to date. The G400 driver is available for pre-order and custom fitting at authorized Ping golf shops around the world beginning today.

“The G400 driver is a prime example of how our engineering team looks at every single detail of a club to ensure we are optimizing each design variable so golfers can improve performance,” said Ping Chairman John A. Solheim. “In this case, we’ve gone slightly smaller in volume (445cc) to improve aerodynamics for faster clubhead speeds while actually raising the MOI higher than any previous Ping driver. We also employed a thinner, forged face to deliver increased ball speeds. 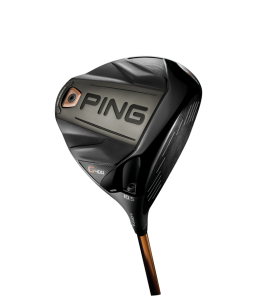 “This commitment to performance enabled impressive distance gains and tighter dispersion, the ultimate driving combination. We’ve also engineered an incredibly pleasing sound in the driver through computer simulation that will turn heads on the tee box when golfers get it in their hands. It even has a shaft that changes color at address to improve the player’s focus.”

Ping’s tour staff, including Lee Westwood, Tyrrell Hatton, Mackenzie Hughes, David Lingmerth and Daniel Summerhays are among the Tour players who are now playing the G400.

“We’ve never seen faster conversion to a new product than we did at last month’s U.S. Open with 13 drivers in play the first week it was available,” Solheim said. “The players immediately loved the look of the driver and became enamored with the powerful sound and feel. At the end of the week, the statistics proved that both the longest and most accurate players off the tee at the U.S. Open relied on a G400 driver.”

Solheim said the forging and patented heat-treatment process of the T9S+ face powers a thinner, hotter impact area that is precision machined to elevate ball speed across the entire face for 16 percent more flexing, and when paired with the aerodynamic gains, results in ball-speed gains of nearly two miles per hour. By making the face six percent thinner and nine percent lighter than its predecessor, extra weight was placed strategically to tighten dispersion even further through higher MOI. The forged face, according to Solheim, was also instrumental in producing the powerful feel of the driver.