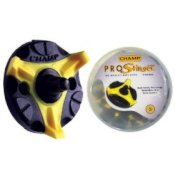 Jason Dufner walked Oak Hill with spikes from  CHAMP/MacNeill Engineering Worldwide. In fact, according to the Darrel Survey, were used by a total of six players who finished in the top 10 in the final major of the year.

Dufner used CHAMP’s ProStinger spikes that are a blend of metal and plastic traction technology to win his first major title. CHAMP spikes have been used by 32 of the past 44 major winners and are available in a variety of options, including the popular ScorpionSTINGER and Zarma.

CHAMP is the world’s largest manufacturer of replaceable spikes. The company produces more than 140 million spikes annually and is a dominant global brand in football, soccer, golf, baseball, cricket, rugby and other sports.

Beyond the cleat category, the company offers a wide range of products, including the Zarma FLYtee that has become one of the most-used tees by professionals worldwide. The new FLYteePRO model, according to McNeill Engineering, is infused with a specially-engineered polymer that makes it nearly indestructible. Like its predecessors, the PRO features a six-pronged head and shallow cup the company says reduces friction at impact, promoting longer and straighter drives.

It’s also a lot easier to put the ball on the PRO tee than a standard tee and indeed, the PRO tee does not snap in two after struck.