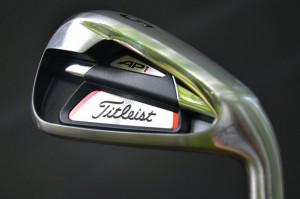 The Acushnet Company says its new Titleist AP1 irons are the “longest, most forgiving irons” Titleist has ever made, with a multi-material, dual cavity design for players that want maximum distance, forgiveness and solid feel in a great looking progressive game improvement chassis. The new AP2 models are multi-material forged irons that the company says offers distance with trajectory control and forgiveness with workability.

That’s hyperbole from most equipment companies in the industry, but if you’ve played the current AP1 and AP2 irons, you know how solid they are, meaning look for more of the same – and better – in the 714 Series.

The new AP1 and AP2 (714 Series) irons will be available beginning Nov. 8, with each featuring what Acushnet says is an advanced CG (center of gravity) height progression that creates higher launching long irons and flatter launching short irons for more carry distance and better distance control. The Ap1 irons are expected to sell on shelves for around $100 per club while the AP2 irons, designed for lower-handicap players, are expected to sell on shelves for $137.50 per club.

“When it comes to iron play, distance without the ability to stop your shot is meaningless. You have to hit the ball far enough to reach the green, but also have the proper ball flight to stop it near the hole,” said Steve Pelisek, General Manager, Titleist Golf Clubs. “What our R&D team has accomplished with the new AP1 and AP2 models is impressive, effectively taking each individual iron as its own design and optimizing its performance to provide longer distance, more consistent distance and stopping control, even when you don’t hit a shot perfectly.”

The new irons debuted on the PGA Tour this past summer. Jordan Spieth won his first-career PGA Tour title at the John Deere Classic with new AP2 irons in the bag, just two weeks after the clubs were made available on tour. Jason Dufner played new AP2’s in winning the PGA Championship for his first major title.

Pelisek said the new AP1 and AP2 irons each provide the best combination of trajectory and distance control. The long and mid irons feature improved dual-cavity constructions (AP1 has a new, deep undercut; AP2 has a 25-percent thinner upper cavity face) with high density tungsten placed low in the head for lower CG, Pelisek said, making it easier for players to launch the ball higher for more carry distance.

The short irons have a thicker upper face and narrower sole that help raise the CG for a lower, flatter trajectory with outstanding control into the green. Pelisek said the short iron lofts in AP1 (7-W) and AP2 (6-W) have been strengthened one  degree to help lower launch and increase ball speed for more distance. A second AP1 gap wedge (52 degrees) has also been added to help with set gapping.

“We’ve really taken progressive design to another level to get that flight and forgiveness where we want it,” Pelisek said. “There isn’t a more progressive set of irons in the industry.”