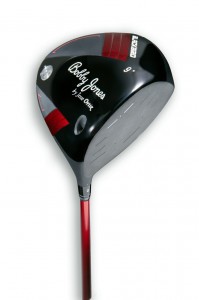 The Blackbird driver from Bobby Jones

Bobby Jones is celebrating its 25th anniversary in 2014 with the launch of the Blackbird Series driver. The Blackbird Series – named for its satin black finish that resembles the Air Force’s stealth titanium fighter jet – is touted as “longest ever” in club designer Jesse Ortiz’s storied career.

The 2014 Blackbird driver features a 460cc pear-shaped head that centers on a dense-grained titanium cup-face design. The variable thickness cup-face design, according to Jones Global Sports, produces low spin while maintaining higher ball velocity off the clubface. The company says this results in the highest CT rating allowed while keeping spin rates at or below 2500 RPM, on average.

The driver’s cup face is laser welded to the 6-4 cast titanium body to create an aerodynamic club head with a sloped crown to increase club head speed. The Blackbird Series driver also offers adjustability through its hosel—allowing for square, one-degree closed or two-degree closed face angles.

“One of the things Bobby Jones is famous for saying is that ‘you swing your best when you have the fewest things to think about.’” Ortiz said. “With our new Blackbird driver golfers have classic beauty with the best of modern technology, in a design that inspires confidence at address. True to Mr. Jones’ sage advice, golfers who put the new Blackbird driver in play shouldn’t have anything to think about other than making a smooth swing.”

The Blackbird Series driver will be available online at www.bobbyjones.com beginning in February with a street price of $399.