Arnold Palmer said today that he didn’t want to argue with anybody over the issue of long putters, but the King used some fighting words in once again expressing his opposition to long putters and belly putters as well as the practice of players anchoring the putters against their bodies. The U.S. Golf Association and Royal and Ancient Golf Club of St. Andrews, Scotland, have proposed a ban on anchoring begin in 2016. 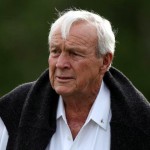 The ruling bodies have yet to formally approve the ban, but Palmer made no bones about his feelings when asked at his Arnold Palmer Invitational at the Bay Hill Club in Orlando.

“We do not need a contraption to play the game of golf,” Palmer said. “That’s not part of the game of golf. To attach it to your body, in any way, is taking a little bit away from the game.

“I would hope we play under one set of rules and those rules would include a ban on the long putters hooked to the body in one way, shape or form.”

Palmer added he doesn’t believe golf needs two sets of rules, which could happen if the PGA Tour follows through with its rejection of the proposed ban.

“I don’t think golf has a place for two sets of rules,” he said. “One of the reasons the game has progressed over the years is the fact that the amateurs and the pros all play the same game and the same set of rules. I feel like that is very important. The key to the future success to the game of golf is just the fact there will be one set of rules and we’ll all play
by them.”