TaylorMade-adidas Golf is expanding its Ghost series of putters with the Ghost Spider S, which it says is “one of the most stable putters” TaylorMade has ever created. 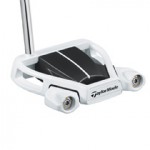 The Ghost Spider S will be available beginning Nov. 1 for a suggested retail price of $179 in standard length and $199 in a belly model.

TMaG says the Ghost Spider S delivers an MOI (Moment of Inertia) measurement of 6,030 – higher than previous TaylorMade mallets such as the Ghost Manta (4,900) and Corza Ghost (3,830). The high MOI, according to TMaG, makes Ghost Spider S stable on off-center hits, and it also makes it easier to control the head and square the face to the ball at impact.

TMaG says the Ghost Spider S’s multi-material head (aluminum and steel) combines a white-colored steel-frame perimeter and top-line with a new, non-transition black crown. The contrast between the white leading edge and black crown, TMaG says, makes it easier to focus the eyes on the topline, making it easier to aim accurately.

In addition to the standard hosel, the Ghost Spider S will also be available Dec. 1 in a “short slant” hosel designed for the player who swings on an arc.