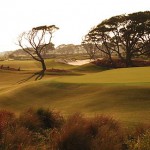 The 3rd hole at the ocean course

The Ocean Course at Kiawah Island, S.C., host to this week’s PGA Championship is one of the more difficult layout players will face this year, not necessarily because of the narrow fairways (there aren’t any), the large amount of sand or even its length – nearly 7,700 yards.  Success this week is going to be determined by a player’s short game – putting, chipping and pitching.

The Ocean Course, designed by Pete Dye, is one most favorite courses in the country. Its views and vistas are amazing, but the golf course is a beast. Holes 13-18 might be the toughest stretch of holes the players will play this year, depending on how much wind they experience and from which direction it blows. It typically blows off the Atlantic Ocean.

I am not sure you can measure or even compare the course to any other on the PGA Tour. Tiger Woods has equated the Ocean Course it to Whistling Straights in Kohler, Wis., but I don’t think that’s fair or accurate.  The Ocean Course is so unique that we will most likely see some very different approaches in strategies.  The fairways are very wide and can be attacked with a fairway metal or driver. The real strategy is going to come from the approach shots, and short game shots. Many of the greens are raised from the fairways, which force the players to hit up hill and carry the ball the proper yardages. This is very difficult in normal conditions, let alone in a major with severe wind potential.

Look for players to hit hybrids and long irons into greens that are not typically receptive to low trajectory shots from the long distances. This will force the players to play many second, third and fourth shots from chipping areas that are set well below the putting surface.  Players will have to make decisions on whether they should chip with wedges, or hybrids and woods.

The green complexes do not appear to be very difficult at first glance, but they have a tremendous amount of subtle break. The ball tends to be affected by the wind, either into the wind where the ball simply does not roll; or if you are putting down wind, the ball will skid and roll too far.

Overall, the Ocean Course will test every aspect of each player’s game. The winner will have to overcome the most mentally and physically demanding test of golf this year.