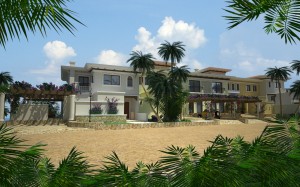 Miami, Fla. – Golf fans around the world had their eyes set on Florida’s classic Doral Resort and Spa last weekend as Tiger Woods played in his second tournament since coming back from major knee surgery. Of course, a packed property also came out to see 49 other top-ranked golfers from around the world as Doral played host to the prestigious World Golf Championships – CA Championship.

To be sure, Tiger took center stage for most of the tournament, but just off the 17th green in a comfortable Alliance Suite setting, principals behind Pristine Bay Resort and the famed father-son golf design team of Pete and Perry Dye certainly made their presence felt as they showcased Honduras’ first luxury master-planned golf resort community to investors and prospective buyers.

Featuring a gorgeous 400-acre site on the tropical island of Roatan, the Dyes’ soon-to-be-opened Black Pearl Golf Course has all the makings of another “to-Dye-for” layout. Located 35 miles off the coast of Honduras next to the world’s second largest barrier reef, Pristine Bay also is actively building a 120-room five-star boutique hotel in a joint venture with Houston-based Lancaster Group and private beach club for residents.

Future plans call for a deep-water 156-slip marina with a mixed-use marina village and Central America’s first spa and medical facility, according to Mario Toriello, Pristine Bay’s vice president of sales and marketing. The resort community is currently offering seven different villa homes priced from $670,000 to $1.1 million (29 of the initial 34 are sold), and homesites that start at $230,000.

The opportunity to buy a pristine piece of the “next great vacation destination” at such relative values was one of the main reasons Americans Brett and Liz Molgren  decided to purchase a hillside custom lot. The Houston couple purchased one of the $350,000 lots that overlooks Pete Dye’s signature island green on the 11th hole.

“That lot would’ve been $1 million anywhere else in the Caribbean,” Brett Molgren told the Real Estate Channel last Friday from Pristine Bay’s VIP tent at Doral. “It’s a very safe, they speak English and it’s a beautiful place.”