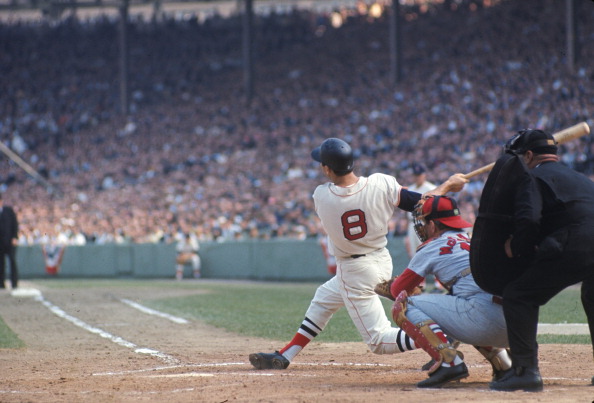 Whenever someone flirts with a Triple Crown season, baseball’s lightweight commentariat feels the obligation to make a series of paper-thin, Carl Yastrzemski-related references. It takes an actual Triple Crown, the likes of which Miguel Cabrera donned last week, to summon punditry of true heft.

And so both Roger Angell, the finest writer of baseball prose to have ever lived, and former U.S. Poet Laureate Robert Pinsky both weighed in on the inimitable Yaz this past week, as a sort of homage to the 45 years he spent as “the last man to win the Triple Crown”.

I don’t hold myself in that sort of literary company, and having moved to Greater Boston in 1972, I was five years late to the Impossible Dream party, the much sentimentalized pennant-winning season that just happened to coincide with Yastrzemski’s Triple Crown (of which not much was made at the time, mind you; they weren’t so rare back then — Frank Robinson turned the trick in 1966, and prior to that, MLB produced one roughly every 10 years). However, perhaps because I completely missed Boston’s Summer of Love, and because I was there in Fenway’s bleachers and glued to Channel 38 over the last half of Yastrzemski’s career, I can add a bit of boots-on-the-ground perspective re. this titanic, complicated figure.

Here are three things baseball fans should know about Yaz:

• His Triple Crown year of 1967 was not his best in the Majors. Yaz won three battle titles but lost a fourth to Alex Johnson, on percentage points, in 1970, when many (myself included) argue he posted the finest statistical performance of his career. Just a single season separated 1970 from 1968, when Major League Baseball raised the mound and ushered in an era of pitching dominance (Yaz would repeat as AL batting champ in 1968, hitting a measly .301). By 1970, batting figures remained depressed across the board. Yet Yaz hit a career-best .329 that year, with 40 dingers, 102 RBI and a career-best 128 walks, which enabled a sick on-base percentage of .452. He threw in 23 stolen bases, just for the fuck of it… 1967 v. 1970: This was the debate we had as kids, referring to the back of baseball cards, and it’s a debate made even more interesting today by the plethora of “new” stats (check out the full monty here), which tend to favor 1967 — but fail to take into account the mound. In context, 1970 was the more impressive achievement.

• As good a hitter as Yastrzemski was — and most all-around statistical analyses rank him about #20 on the various all-time lists — he was a defensive player of comparable greatness. Of the 20 people ahead of him on the all-time Elo batters rating, for example, only a handful of guys can claim this sort of elite duality: Willie Mays, Honus Wagner, Tris Speaker, Eddie Collins and Mike Schmidt. Plenty of others were fine fielders (Stan Musial, Rickey Henderson, Lou Gehrig, Eddie Matthews, Alex Rodriguez), but Yaz was the best leftfielder in the American League for a decade or more. By the time I arrived in Boston, he was 32 and still an excellent glove man, but his best days were behind him — so I took his legendary ’60s-era fielding acumen more or less on faith. Indeed, he played a lot of first base in the early ‘70s — by ‘74 he was moved there permanently, in addition to DH, in order to accommodate a young Jim Rice and another up-and-comer, first baseman Cecil Cooper. Then, in September 1975, with the Sox closing in on their first post-season appearance since ‘67, Rice broke his wrist. Yastrzemski went back to left and there, for the first time in my experience, was the fielder everyone had raved about. Thirty-five years old but invigorated by the pennant-chase, he threw his body around like a rag doll, giving nothing away to the young defensive wizards playing beside him, Fred Lynn and Dwight Evans. I maintain a distinctly thrilling memory of Yaz against the reigning World Champion A’s in the 1975 ALCS — diving to his left to cut off a line drive in the gap, popping up, whirling and gunning down someone at second base. And, of course, no one played the Green Monster better. Yaz would go back to left field for 152 games in 1977, as a 37-year-old, and win another Gold Glove, his 7th.

• For all these achievements, however, and the extraordinarily high esteem in which Carl Yastrzemski is still held throughout New England, the man remains a tragic figure. Yes, he was one of the all-time greats and while Yaz was never cuddly (he was rather taciturn and aloof actually) he allowed us to forget the guy he replaced, Ted Williams, whom the fans did not revere and who never led the Sox to any meaningful team success. But for all Yastrzemski’s grit and splendid achievements, twice during the 1970s, with the Sox on the brink of that historical team success, it was Yaz who stood at the plate when the curtain came down. He made the final out in Game 7 of the ’75 World Series against the Reds, flying out to left center with Boston trailing by a run. Three years later, in the famous ’78 playoff game against the Yankees, Yaz ended the game by popping out to third baseman Craig Nettles, stranding both the tying and go-ahead runs. This not to say that Yaz wasn’t at his very best when the Sox needed him most, because he generally was: He hit .400 in the 7-game Series loss to St. Louis in ’67; he hit .455 against the A’s in ’75, and .310 against the Reds. Even in the playoff game, perhaps the must soul-crushing moment of my entire childhood, he was immense — homering off Ron Guidry in the second inning and driving in another run in the 8th…

The indignity of twice making the final out after having done so much is not failure. It is tragedy, and texture.

4 Responses to “Three Things You Should Know About Carl Yastrzemski”