BENTON HARBOR, Mich.—Colin Montgomerie was in a playful mood.

Asked his thoughts about Tom Watson returning as Team USA’s Ryder Cup captain, Monty said, “What, with [Watson] standing behind you? Well, obviously, he’s the best—the best that’s ever lived. A wonderful guy and a super father, husband, whatever. When he leaves the room, I can tell you the truth. But since he’s in the room, it’s quite difficult.’’ 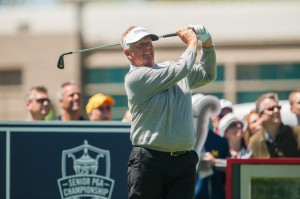 Montgomerie finishes with a flourish.

`The room’ was the interview room at the 75th Senior PGA at Harbor Shores.  Not only were Watson, who shot a second-round 68, and Monty (69) talking to the media. Their Friday morning player partner, Bernhard Langer (68), also paid a visit.

Those sub-par rounds left all three 4-under after 36 holes. They are tied for the lead with three other golfers.

“It was a pretty good three-ball, I guess,’’ Langer said.

Pretty good? All three are Hall of Famers who have captained winning Ryder Cup teams. Watson, who won at the Belfry in 1993, will return as captain this fall at Gleneagles in Scotland to try and revive Team USA’s sagging fortunes.

We all have an idea of what a football coach and a baseball manager bring to a successful team. What, I asked Watson, does a Ryder Cup captain bring? 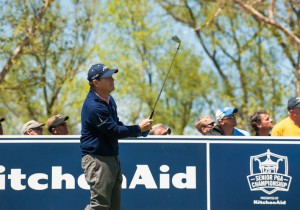 “I hope I create the environment for winning,’’ he said. “To do that, keep it loose, keep it happy, keep it comical. Just do what I can to alleviate the pressure. That’s what the Ryder Cup is all about. There’s a lot of pressure in the Ryder Cup. I know what the pressure’s like. If I can help with the pressure, that’s my job.’’

“I think we all feed off each other,’’ Monty said. “It was good that all three of us were playing well. Tom Watson putted extremelly well. He’s hitting the ball great; 64 years old. It’s amazing how he still is very competitive. It’s great to see.’’

Watson, who has never seemed all that ferocious, is getting a lot of television-commerical facetime these days as the genial legend who drops in on amateur players with golf-club gifts and tips.

But underneath that Midwestern grin, he’s still an iron-willed golfer, as he demonstrated in the 2009 British Open at Turnberry, where, at 59, he nearly won his ninth major. Considering that players in their early 50s tend to dominate the senior tour, a seventh senior major in southwest Michigan would be quite a feat for Watson.

It’s why he’s here, though. 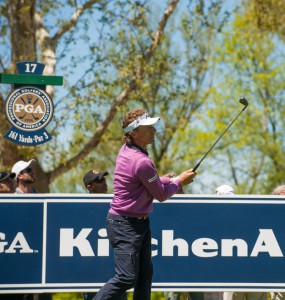 Langer is one of the most consistently tough Champions tour competitors.

“When I don’t do well, I get angry with myself. Still,’’ Watson said. “Like [Lee] Trevino said, `When I stop getting angry with myself, then I know it’s time to quit.’ I haven’t reached that point yet.

After an opening 65, first-round leader Joe Durant ballooned to a 75 lowlighted by a triple-bogey seven on the 16th hole. “I played horrible today,’’ Durant said. “Just made a mess [of No. 16].’’

While there’s the potential for big numbers from errant full shots, the more ominous peril stems from the greens at Harbor Shores. They feature bumps and undulations, and are practically divided into multiple zones that can leave golfers muttering.

“Can I be as diplomatic as possible,’’ Monty said, “and say they’re the most complicated green designs that I have ever, ever seen?’’

The greens, Watson added, “play very small, because of all the humps and bumps. Your iron game has to be on. Getting the ball close to the hole with your irons is the key here.’’

It all added up to a crowded leaderboard heading into the weekend. And a leaderboard filled with a surprising number of Ryder-Cup-winning Hall of Famers.

“We spurred each other on,’’ Langer said. “Three Hall of Famers playing together, that’s always fun.’’