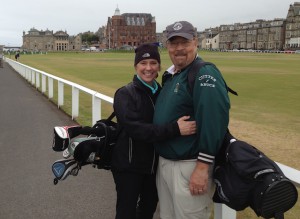 This is for golfers who have always wanted to play in Scotland, but were a little overwhelmed by the whole concept.

The answer is, yes, it is. And you can do it and enjoy it. Even if you don’t over-power the ball, even if you’re not traveling as a foursome, even if you’re on a bit of a budget, it’s possible to play in the birthplace of golf—and have the time of your golfing life.

I say this because we did it. My wife and I played 10 rounds, mostly at classic links courses. We weren’t on a tight budget because we’d waited so long to go and the bucket list needed to be addressed. And so, five of the 10 courses we played are on Golf Magazine’s listing of the world’s top 100 courses. My wife was thrilled to learn that.

Those five—St. Andrews Old Course, Turnberry, Royal Dornach, Castle Stuart and North Berwick West Links—were a delight. But the lesser-known courses we played were as enjoyable as the legendary links—just as beautiful and in many case, more playable. That said, the legends took the experience to another level.

Our adventure began at St. Andrew’s, where we played the Old Course, the New Course and a change-of-pace course, the Dukes. It finished with a magical 36-hole day at Turnberry, holing out on No. 18 of the Ailsa course, where some celebrated Opens have been contested, as the sun set over the Isle of Arran  across the Firth of Clyde. 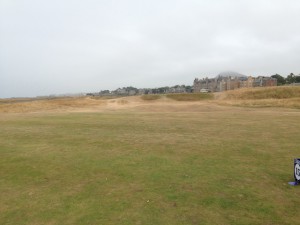 North Berwick West Links, No. 15. The original Redan hole. There’s a green up there somewhere beyond those nasty bunkers.

In between, we played a pair of splendid courses in North Berwick, a charming seaside town not far from Muirfield, where we interrupted our playing experience to watch Phil Mickelson add his name to the list of Hall of Fame winners at that historic venue. To balance the tour, we headed north to the Highlands for a few days, where we played three courses that were as different as Scottish golf can be. What Pitlochry, Royal Dornoch and Castle Stuart had in common, though, was that they were all memorable.

There was a great deal of planning involved, particularly because we were going in prime-time July to satisfy our Open craving. But the mapwork and research and e-mails wound up being part of the adventure.

And it will be that much easier for us to plan the next trip. We already are building an impossibly long list of courses and regions that won’t fit into just one visit.

In upcoming posts, I’ll tell you what the courses were like. And provide some suggestions on where to stay. And eat. And drink. Responsibly.