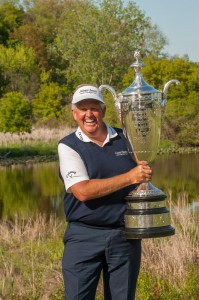 BENTON HARBOR, Mich.—He has been the leading money winner on the European tour a record eight times. Only Nick Faldo has notched more points in a garish Ryder Cup outfit. And yet, some major accomplishments have proved elusive for Colin Montgomerie.

The gregarious Scotsman has never won a major, settling for second five times among his 10 top-10 finishes. And he has never won a PGA Tour event. Monty added a nice line to his Hall-of-Fame resume on Sunday, though, winning the 75th Senior PGA, the most historic event on the Champions tour.

In his first season on the senior circuit, Montgomerie, who will be 51 on June 23, at least has now won a big event on U.S. soil. He sealed his victory on Sunday with a final-round 65, to finish 13-under par on the undulating greens of Harbor Shores.

“Fantastic! Superb!” Montgomerie said afterward. “Theres a motto, if you fail and fail, you come back and try again. I’ve had couple of failures here in America. It’s great to finally win.” Monty did it in classic fashion, holding off a hard-charging Tom Watson, 64, who shot a final-round 65 to finish second, four shots back. 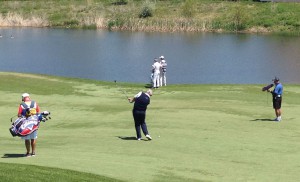 Montgomerie kept it in the short stuff on No. 6 Sunday, while Langer (in white) was living on the edge.

“Four twos! How about that?’’ Watson said after birdies on four of the five par-threes. “That was good. I’m really upset I didn’t make that last putt because I would have shot my age. A 65 is a darn good score on this golf course. It wasn’t good enough to beat Colin, though. He kind of ran away with it.’’

This victory came in the seventh Champions tour start for Montgomerie, who’s a regular on the senior tour this season and will play at the Ecompass Championship in Glenview next month.

Will hecklers, who inexplicably got under Montgomerie’s skin at Harbor Shores on Saturday, surface in Chicago? Let’s hope not. But with Monty—who’s engaging but a bit rabbit-eared—you never know. 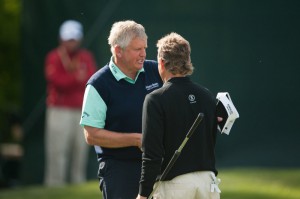 Old friends and rivals Monty and Langer played all four rounds together at the Senior PGA.

Bernhard Langer, who began the day one shot back, shot a final-round 70 and finished 7-under, tied for third with Jay Haas. When Watson birdied four of his first five back-nine holes to get to 9-under, he was one shot behind Montgomerie.  But Watson missed a short birdie putt on No. 15 around the same time Monty birdies No. 12. That gave Montgomerie a two-shot cushion.

“It’s more relief than anything,” Monty said. “I’ve been coming here since 1992 in major championship golf–22 years, to try and win a major championship or any event here. It’s relief that it’s happened. Hopefully, I can build on this. This can only give you more confidence.” Montgomerie added another birdie where Watson had missed, at No. 14, for a three-shot lead that took the drama out of the finish.

“Colin can really keep that clubface square,’’ Watson said. “He has the type of game that if you play major championships [with] firm greens and tight pin positions, he’s got the type of swing to do that and make it work. He never had any luck [in majors] playing the regular tour, but he certainly came close a bunch of times.’’

The “senior” part of this major isn’t all that major to Monty. “There’s a lot of good golfers over 50,” he said. “It’s great to sit on top of the tree at least one day. It’s fantastic.”