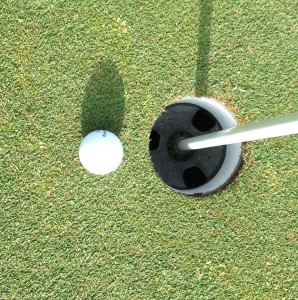 Many people in the golf business talk about making the game more fun.

John Baxter is doing something about it.

The founder of west suburban Chicago Highlands, a four-year-old upscale private club surprisingly close to the Loop and Michigan Avenue, Baxter was as chipper as a schoolboy on Memorial Day.

And that was before Baxter teed off on Big Cup Day, when he had greenskeepers to install cups twice as big as regulation size for afternoon golfers to enjoy.

No one enjoyed the experiment more than Baxter, an enthusiastic self-described hacker who nearly holed out his approach for eagle on the 371-yard first hole, than happily settled for birdie.

“The game is supposed to be fun,’’ Baxter said during a rain delay, excited about being one-under (give or take a mulligan) after eight holes. “The big cup makes the game more fun.’’

He has a point. Long putts and many chips are more fun because there’s a better opportunity to drop them in—and because the big cup reduces anxiety about the knee-knockers that produce so much anxiety in the golfing world.

“People come out to the golf course to get away from stress and relax,’’ Baxter said. “But when they stand over a five-footer, what are they feeling? Stress.’’ 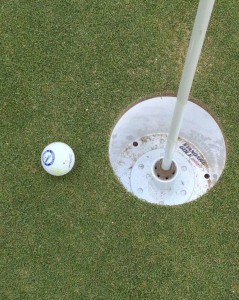 The Big Cup reduces stress. “But there’s still skill involved. You still have to make the putt,’’ he said, emphasizing that the six-inch cup, while enticing, requires concentration and a good stroke. It merely rewards more good efforts.

A Duke grad, he pointed out that college basketball responded to Dean Smith’s legendary but numbing Four Corners offense at North Carolina with a shot clock and a three-point line—and the game has flourished with more offense. The same goes for the NFL’s shift toward to wide-open offense, he said.

“Matt Suhey wouldn’t have a job today,’’ he said, recalling the fullback who blocked for Walter Payton.

Why is the Masters more coveted than the U.S. Open?  Because, Baxter said, at the U.S. Open, the winner is the player who does the best job of hacking the ball out of the rough.

At Augusta, where there basically is no rough, people get to see birdies and eagles. And people like to see great shots.

Baxter puts his money where his mouth is. Despite a sluggish economy, he and his two partners opened Chicago Highlands in 2010 and have built a thriving club that requires a six-figure initiation fee.

How? His golf course is in Westchester, a close-in suburb near several affluent suburbs. But he also offers a delightful linksy Arthur Hills design that’s fun for all skill levels that was No. 5 on Golfweek’s list of best new courses for 2010. 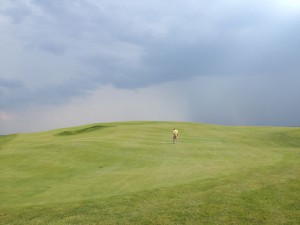 Celebrated No. 9: Golf Digest gave its `Golf Hole of the year to this less-is-more uphill par-4, a barren but enchanting climb marked only by one pot bunker.

The ninth hole, which is basically a short but straight-uphill par-four (344 yards from the tips) to a green on top of a hill, was voted America’s “Golf Hole of the Year’’ by Golf Digest. The view of the Chicago skyline from this perch is nothing short of marvelous.

Chicago Highlands also has a blind-shot par-three (No. 13) into a valley that salutes the original at Lahinch in Ireland, par-fives that have risk-reward touches reminiscent of Augusta National, at least two driveable par fours and tee boxes by the bushel.

On the par-five 12th, for example, there are nine tee boxes. “Some people want a 10th,’’ Baxter said.

And at Chicago Highlands, lessons are free to the membership.

Non-golf activities aimed at energetic families also are plentiful. A large clubhouse is on the drawing board for when the club, which has 180 members, reaches 250. In the meantime, there’s an ample swimming pool and basketball hoops that can be set at any height, allowing the shortest and youngest players to know the sensation of dunking.

But the Big Cup project holds a particular fascination in Baxter’s innovative mind these days.

“I’m gong to organize a Masters of Big Cup,’’ he said with a twinkle. “Find some corporate sponsors and play it right here every year.’’

Don’t dismiss that intention too quickly.

A youngster in another group experienced the thrill of making a hole in one, a development that delighted Baxter as much as the grade-schooler. 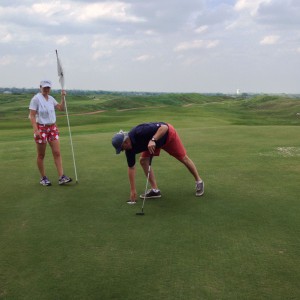 You can put your entire hand, and a good portion of your arm, into a Big Cup, as John Baxter demonstrates.

While Big Cup is in no danger of being adopted as the new standard in golf, there is a place for it, as demonstrated by our fun round.

Mike Munro, who operates the Golf Dome at White Pines, chipped in on No. 1 and No. 2.

Despite desultory ball-striking, I had a couple of birdie looks. After missing them, I can tell you that doubling the size of the cup certainly helps. But it doesn’t guarantee success.

For one thing, you have to resist the urge to believe that everything is going in. What works best, I found, is to forget about the size of the hole, prepare and putt longer putts the normal way. And then, be delighted when a putt that would have singed the edge of the hole drops in nicely.
An undeniable boost, though, is that Big Cup takes the anxiety out of the five-foot knee-knocker. It unseems unlikely that anyone would be fretting about losing that draining aspect of the game.

Another upside: Baxter’s joy at being under-par through eight holes buoyed our whole group.

“I’ve played a lot of bad golf on some of the world’s greatest golf courses,’’ Baxter said. “I want the game to be fun.’’

In a golf world where scrambles and shambles are common, where alternate shot and best ball and and nine-and-dine have found places, why not Big Cup?

It would be easy to keep the regular flag in place for those who prefer that, and simply add a Big Cup for twilight players who want a relaxing change at the end of a long weekend.

That’s the way Baxter tested it at Chicago Highlands. And judging by the warm reception, Big Cup could become a regular diversion.