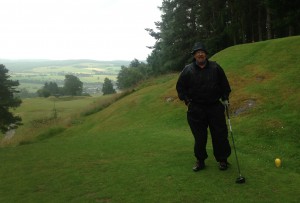 After a record run of balmy weather, Scotland reverted to form in Pitlochry, gateway to the Highlands

PITLOCHRY, Scotland—When Liz suggested Pitlochry as a good place to stop and break up the ride from North Berwick to Dornoch, I liked the idea. But the truth is, I didn’t even know how to pronounce it. For two months last winter, I was talking about Pitloch-tree, not Pitloch-ree. Now I know.

This picturesque little resort town, considered the gateway to the Highlands, has a marvelous little terrain-laden golf course that could be used for downhill skiing if it were covered with snow—and at least two unique 19th-hole options: a combination hotel & brewery, and “the smallest distillery in Scotland.’’ With glorious picture-window views, the clubhouse bar and grill was deserving of attention, too. But first, the golf.

It was an easy two-hour drive from North Berwick through the outskirts of Edinburgh and then north to Pitlochry. We arrived around noon, a couple of hours before our tee time, but decided to go straight to the Pitlochry Golf Course. 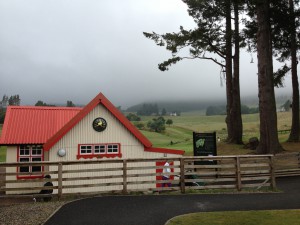 Are we going to tee off in this? You bet. There’s a golf course up there somewhere in that Scottish gloom.

After 10 straight remarkably dry days, Scotland weather seemed on the verge of returning to its norm. We drove through some showers and the sky looked ominous, so we thought we’d try to play earlier, in case that would help us dodge the weather.

“Yes, looks like there’ll be some rain moving in and out,’’ the young man in the pro shop told me. He also said it would be all right if we teed off early. In light of the gloomy skies, the first tee looked open. By the time we got to the first tee, though, the second of two foursomes—older couples, like ourselves—were hitting their tee shots. I wondered if we’d end up waiting, but that was no problem. Even though we were only two, they played so quickly, we barely saw them. Another reason to admire the Scots and their game.

I immediately liked the name of the first hole, Distillery. The hole itself, I wasn’t so sure about. It was a severely uphill par-four that featured a meandering creek and some nasty pot bunkers. The right side was out-of-bounds. But I managed to dodge the trouble for a routine bogey. The second hole, Old North Road, also was uphill. A house (also out of bounds, of course) sat on the left near the green, and a road ran across the fairway beside the house. Because of the rise, the approach was pretty much a blind shot, but we were too busy gawking at the mist hanging around the dense forests on the hills above us to be very concerned about a shot here and there. This, of course, was very different than the links golf we had been enjoying. But the ominous clouds and lush north-country vegetation was beautiful, and the ball still seemed to be rolling, even on this wet day. 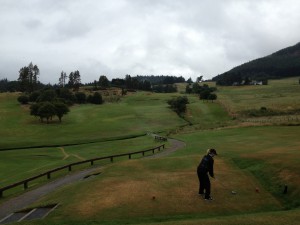 Liz on 1st tee at Pitlochry. That fairway is a lot steeper than it looks.

No. 3 also was uphill, but it was an enticingly short 279 yards. And after a decent drive, I started to think my swing would be worthy that day. I botched the pitch into the craterous front-right bunker, though, and followed with a bad swing from the sand, then another spoiling the hole.

At that point, though, we had other problems. The rain was starting to come down heavily, and we hastily put on our rain gear at the tee of the fourth hole, a 146-yard par-three. Because the sixth green wasn’t far away, and because I thought I saw the group we were following putting out, I wasn’t even sure where we were going. But they turned out be a different group, and I finally realized where the fourth green was. Water dripping off the bill of my cap—I hate that—and uncertain of my soggy grip, I made a nice easy swing and stuck a nice shot six feet from the pin, then rushed the birdie putt in what had become a steady downpour.

Trooper that she is, Liz was enjoying the ugly weather and her fashionable new Gore-Tex suit. So we trundled on. It continued to pour for a couple more holes, but knowing that this was our only opportunity to play a course we really liked, we slogged on.

Every hole was a variation on the theme: Uphill or downhill, through tree-lined fairways that were generally wide enough. Sometimes, though, the fairways sloped sharply, demanding that the ball land in the proper place for it to bound into position. As we continued to climb, the views continued to grow on this increasingly engaging 1908 course, set amid the Grampian Mountains. Looking down at the red-roofed clubhouse and pro shop, we realized with delight that there was a castle jutting out from the trees on a hill far beyond and above the clubhouse.

Sadly, I botched No. 9, a fun-looking 345-yard downhill par-four, pushing my drive way right into the heather or gorse, or whatever weeds were gobbling Titleists out there. No. 10, an uphill 414-yard par four deserving of its No. 1 handicap rating, was a long double-bogey march for me, and a nice bogey for Liz. But we both hit the green on No. 11, a healthy uphill par-three, and we were smitten by Pitlochry.

Far from dampening things, the gloomy wet weather enhanced the adventure—especially because we had enjoyed such good weather for so long before hitting this wet patch. There was only one hole that I really couldn’t fathom on this par-69, 5,600-yard layout—which has 15 par-fours and three par-threes. That was the final one-shotter, the 148-yard 16th—a narrow intimidating hole that had a tee, a green, six bunkers around the green and no-man’s land everywhere else. I hit three balls—one O.B. right and two into the high-weeds chasm between tee and green before marking down my X. I did find three replacement balls, but they were in the weeds around the green after a fruitless search of the chasm. During my Easter-egg hunt, Liz gave me one of those what-are-you-doing looks, but my caddie roots don’t allow me to tolerate a golf-ball deficit lightly.

I’m sure No. 17 and 18 would be very fun downhill par fours on another day, but between the wet weather and the 16th-hole disaster, I was ready for a sport where bending the elbow is a good thing. So I plodded in. A high-pressure air blower had been placed conveniently outside the pro shop for cleaning shoes, clubs—any item that had brought along unwanted souvenirs of the golf course. Yet another great idea from Scotland. Moving into the clubhouse, we dried out with a couple of pints and gazed out at the golf course on the hills above us. Felt like I was in a ski lodge.

We stayed that night at a charming B & B, if you like that sort of thing. Had a good piece of salmon at Victoria’s, took a lovely walk around the dam on the edge of town, grabbed an ice-cream cone on the somewhat touristy main drag and retired early. The next day we were off to Royal Dornach, a two-hour drive to the north, followed by a round at Castle Stuart, where Phil Mickelson had won the Scottish Open, the day after that. These two courses, of course, are much more highly rated than Pitlochry. But if they were more enjoyable, I was thinking, they would be very nice indeed. Beyond the golf, we had enjoyed what we had seen of Pitlochry so much that we resolved to return some day. When we realized that while Dornoch was nice but quiet, and started thinking about shortening the healthy drive to our final destination, Turnberry, we headed back to Pitlochry right after our round at Castle Stuart. That was an excellent idea. (to be continued in Pitlochry, Part Two)