While there are plenty of other interesting outdoor activities to do on a vacation to Western Colorado, golfers should still take their golf clubs as there are some good choices of places to play with reasonable rates. After playing with some of the worst rental sets I have ever seen on a recent visit, I wished I had followed Wes Bolyard’s lead and taken my own. I will do that when I do go back as there are now even other courses I definitely want to play.

Bolyard and I flew into Grand Junction, CO, with me going through Phoenix, something you don’t have to really do from DFW with direct flights on American Eagle available at slightly higher costs. Then we took an almost four-hour ride in a rental car with almost identical to the one Wes owns through eastern Utah—some beautiful scenery featuring unique sandstone formations.

We did make a stop at the Hideout Golf Club in Monticello, UT and drove around it, not seeing any golfers until we got to the 17th hole. It’s a hidden gem. There were a lot of ups and downs and some interesting holes. It should be on your list to play if you have more time than we did. 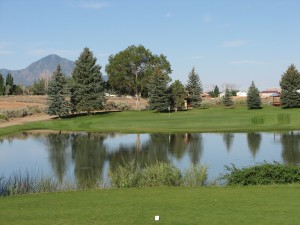 Conquistator No. 3 (Photo by Wes Bolyard)

Our first golf round was the next morning at the Conquistator Golf Course in Cortez, CO., designed by Press Maxwell and Bill Stroud. From almost every place on the course, there is panoramic scenery with views of Mesa Verde, LaPlata Peak and the Sleeping Ute Mountain.

It’s a player-friendly course from the white tees at 6,378 yards (rating of 68.8 with slope of 125) in that it is relatively flat. Assistant pro Jeff Carr, sporting a shorter hockey-style swing, made three birdies on the front 9 before having to leave to take care of other things. Those wanting a little more challenge can move to the blues at 6,819 (70.5, 129) or the golds at 7,152 (72.6, 131). However, a premium is put on accuracy with Ponderosa and Pinon trees lining the fairways and water coming into play on eight holes. In addition, recent rains left lush grass in the rough around the greens that made getting up and down difficult. Hitting the green on No. 7 is difficult as the green is one of smallest I’ve seen on a par 3 requiring more than a wedge.

If I get a chance to go back, I’d opt to fly from DFW to Durango and spend a few more days in the Four Corners—where Colorado, Utah, New Mexico and Arizona boundaries meet—and play such courses as Pinion Hills Golf Course, the Divide Ranch & Club and The Glacier Club.

Our hostess Lynn Dyer treated us to great Mexican-style dinner at Pepperhead and lunch at The Farm, where all the food was home grown—two places I would highly recommend if you get to Cortez.

Another long, but beautiful drive—I was glad Wes was doing all the driving–through the Rocky Mountains was on our agenda for the afternoon. Expect delays in the summer as that is when they work on the roads.

We made a stop at the Telluride Ski & Golf Club, a mountain course that I definitely want to play in the future. It measures only 6,573 yards from the tips, but there’s plenty of elevation changes that add to the challenge. Most first-timers should probably play from the blues at 6,074 or the whites at 5,265. Women have a choice to play the whites or moving to the reds at 4,657.

While it’s not likely to get many golfers, the Cedaredge Lodge was our home for the next two nights. The owners, Gary and Donna Allen, and the other guests made us feel right at home. My room was small, but I had no problem sleeping, especially hearing the gurgling stream that ran right behind my room. A visiting Texas dentist, his wife and other relatives were there to hike the Grand Mesa, the largest flat-topped mountain in the world at 10,000 feet. 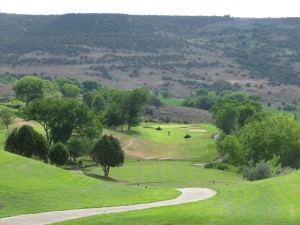 Just a few miles down the road was the Cedaredge Golf Club, formerly called Deer Creek Village Country Club. “We changed the name to avoid confusion with another course in Colorado,” said pro Larry Murphy. It was built on a farm donated by a local lady to this small agricultural community.

The front nine plays through homes and when you are on your game, as Wes was, birdies can come easy, if you avoid Surface Creek. The back nine is as different as night and day as it traverses the side of a hill, easily two to three shots tougher. Mishit a shot and double bogey or higher will be the result.

The Wildfire Pizzeria & Wine Bar is located in the clubhouse, featuring a special oven from Italy. I looked forward to the pizza, but even with a great oven, you need someone to watch to make sure the crust is not burned–as mine was. The meat, cheese and vegetable topping made a tasty meal. 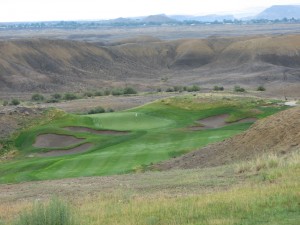 Stiff winds along with rain and lightning posed problems in the afternoon visit to Devil’s Thumb in the adobes at the southern base of Grand Mesa outside of nearby Delta, named for a rock formation that looms above it.

As one player noted, “When humans colonize the moon, I expect to see a course resemble Devil’s Thumb. “ There are no homes around, but plenty of views of the Grand Mesa to the north, Raggeds and West Elk Mountains to the east and the San Juan Mountains to the South from everywhere on the course.

The course, designed by Rick Phelps, received some rave reviews when it first opened, ranking among the most affordable public courses in the U. S. by Golf Digest. The green fees are still reasonable—$42 during the week and $49 on the weekends. Walkers play for $16 less.

The two most dramatic holes—Nos. 3 and 13—feature tee shots down to greens more than 150 feet below. Wes did drive the green on the 13th, narrowly missing an eagle. It takes a drive of more than 250 yards to reach any part of the fairway. The safe path on that hole calls for a hybrid or iron to the fairway on the same level as the tee and a shorter approach downhill to the green.

Our hostess Kelli Hepler and her business partner Bob treated us to a nice meal at RJ’s Steakhouse. I couldn’t eat all of a 16-ounce prime rib end cut, but it ranked up with the best I ever had.

The Golf Club at Redlands Mesa, one of the best courses in that part of Colorado, was not on our schedule. I later heard that it was one of Jim Engh’s best designs when I chatted with a friend here in Texas. We did stop by en route to the airport. After seeing it, I certainly wished Gaylene Orr had just put me on a later flight that day and added it. Of course, that gives me an excuse to go back to Grand Junction and maybe get a chance to taste some of the wine since I understand there are 21 wineries there.