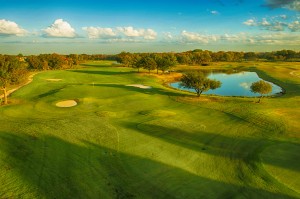 The 18-hole Traditions Course at the newly redesigned municipal golf venue, The Courses at Watters Creek, in Allen, TX is building a reputation since reopening in January 2013 as one that’s player-friendly, in stark contrast to the golf course it replaced, Chase Oaks Golf Club.

The transformation began with the D.A. Weibring and Steve Wolfard renovation of the old Blackjack 18 holes, a Robert von Hagge and Bruce Devlin design that was regarded as one of the most challenging public links in DFW. Many average golfers thought it was just too hard.

Weibring noted that steep burns were softened, landing areas expanded and the greens made more receptive, allowing golfers to bounce their approach shots into most of the greens, even the ones with water features.

He added that steps were also taken to protect homeowners, including the rerouting of some holes and adding trees, bunkers and other features along the edges of the property to direct play away from the homes.

The lakes on the old par 5 No. 8 were relocated to make room for the new par-3 No. 11 and the new short par-4 No. 12, playing in the opposite direction. This now keeps homes that used to be bombed by errant slices more out of play.

Overall, the routing has been reversed with the No. 1 tee now starting where the old No. 18 green was located and the green located near where the tee originally was located, but regulars will see a lot of holes that run in the same direction which look familiar with only subtle changes.

The signature par 4 No. 13 is now No. 6. It still features a drive from an elevated tee to a fairway with trees on both sides, putting the emphasis on accuracy. The approach shot must still carry a creek with a large retaining wall, but the green has been lowered three feet, making it more receptive. In addition, there will be a local rule that allows for a drop on the green side of the hazard as one way to speed up play.

No. 18 is located in the corridors of the old Blackjack No. 8 and the Sawtooth No. 1, finishing at a green right below the clubhouse. Golfers will have to make a choice with their second shots, carrying a creek 150 yards from the green and having a short iron approach or laying up and having a long iron approach.

When completed later in 2013, Holt believes the different playing options at The Courses of Watters Creek are going to fit everybody from the people who are curious about the game and want to learn it at their own pace to the championship type players that wants a challenge.

The six-hole Futures Course, featuring holes from 40 to 120 yards, was overseeded with rye and open for preview until May and then will re-open in August. Located right next to an expanded driving range, The Futures Course will be lighted for evening play and is designed as a place for beginners, and those looking for a quick game.

The nine-hole Players Course will also open later this year and will feature six par 3s and three par 4s. Holt noted it will be a good place for golfers to work on their irons.

Additionally, The Courses at Watters Creek offers a short game area with three greens and four bunkers for those wanting to work on this part of their games.
.