Ken Rams, the director of golf at Cypress Bend Golf Resort and Conference Center, has an unusual commute to work. He walks out of his home on the Texas side of Toledo Bend Lake and takes a three-mile boat ride and a short ride on a golf cart to the golf course on the Louisiana side. If he had to drive a car to work, it would be a 26-mile trip, one that on rare occasions he might take since his wife also works at the resort and they sometimes go and come back at the same time.

When they lived in Richmond, Va in the mid-1980s, the couple would come to visit and fell in love with the lake lifestyle, deciding to relocate. Then Rams got the job at the course in 1998, two years after the Dave Bennett design was completed. The couple eventually inherited the Texas home when her parents died. 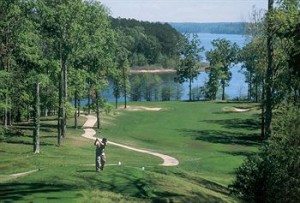 While bass fishing is still the major attraction at the 160-mile long, 186,000-acre Toledo Bend, golfers will definitely be in awe of all the breathtaking views of the lake from a bluff at the western Louisiana course, part of the state’s Audubon Golf Trail, that curls around an inlet of the lake and meanders through a hardwood forest with dramatic elevation changes.

The course isn’t that long, measuring only 6, 707 yards from the tips, but seems to play longer as the holes on the backside by the lake tend to have twists and turns on severe dogleg holes that take the driver out of the hands of long hitters. Golfers from the blues at 6,248 yards, the whites at 5,784 yards and the reds at 5,091 yards face similar challenges deciding what to hit off the tees for the best results.

Two of the more demanding approach shots come on dogleg right pa r4s at Nos. 14 and 16 where after getting as close to the water as you dare with your drives, you have to hit over an inlet of the lake to get to the greens. Bunkers and trees on the right sides of the two fairways force golfers to aim down the left sides off the tees.

A recent renovation included the elimination of 25 bunkers, leaving the number now at 55, but they’re still in strategic places in the landing areas and waiting for errant approach shots.

General manager Bradley Anderholm liked Cypress Bend so much that he wanted “skin in the game” when he turned down another job in Michigan to accept his current assignment in 2012. Of course, his wife’s choice of warmer weather down south played a role in that decision. She now also works at the resort.

“The golf course is a great amenity for our conference center,” he said. “It’s not what country club members really expect as far as conditions are concerned, but most golfers still rave about the scenic vistas of the lake and the hilly terrain.”

It’s a great value with rates of $55 during the week and $70 on weekends and holidays with discounts of $10 for seniors. Golf packages for stays in the 14 villas located across from the golf shop can handle buddy trips of up to 28 since there are that many queen size beds.

The 18-hole golf course is now just one of many amenities at the state-of-the-art conference center with an elegant country inn décor that features 95 luxurious rooms, including 17 suites like the one that my wife, granddaughter and I shared recently. There’s an 82-seat amphitheater, offering tiered seating, ergonomic chairs, wireless service, rear screen projection and built-in projector. In addition, nine other meeting rooms, including an Executive Boardroom, are available for groups having conferences.

As my granddaughter can verify, the heated indoor/outdoor swimming pool was a great added benefit when traveling with grandparents. There’s a full service spa and salon for those desiring such services.

There’s also fine dining available in the Cypress Dining Room with a menu that include such Louisiana dishes as crawfish etouffee, which I really enjoyed, and fried gator tail, which I ate for the first time to just say I had done it. The bourbon bread pudding was fantastic, making an impression on even my wife, who usually avoids desserts for health reasons.