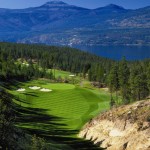 While sometimes overlooked, the Okanagan Valley, located in a fertile valley between the Cascades Mountains and the Monishee Mountains in Western Canada, offers some quality golf, especially for those who also like wine.

It’s a little off the beaten path between Vancouver and Calgary, but you can get to the Kelowna Airport from Seattle or even drive from places in the northern United StatesThe addition of

The Ridge Course at Predator Ridge Golf Resort, located in Vernon—the same name of the Texas town where I grew up–about 40 minutes from the airport, has certainly given golfers more reasons to make the trip.

The Ridge, designed by Canadian golf architect Doug Carrick, opened in 2010 and quickly assumed the title of the best new course in Canada by SCOREGolf Magazine. Built on a pine-covered ridge that rolls down toward Lake Okanagan, the course offers magnificent views as it weaves through the trees and around granite outcroppings that frequently come into play.

Even with all the trees and elevation changes, many still feel that it is more player friendly and not as intimidating as its sister course designed by Les Furber, The Predator. The Ridge’s greens can be firm and fast, but do not have as many slopes as the other course. In addition, there are fewer bunkers and most of the holes tend to play downhill rather than uphill.

Located in a meadow, The Predator is actually more wide open with a links feel, but has multi-tiered greens that are more challenging with shelves that offer difficult pin positions where three putts are more common. The course’s reputation as one of the hardest in Canada was helped by the fact it hosted the Telus Skins Game in 2000 and 2008.

The resort featured 27 holes–Red Tail, Osprey and Peregrine—when I visited several years ago and I felt it was a tough challenge, especially the third nine which was eliminated when officials opted to build the new 18 holes.

Predator Ridge offers a variety of accommodations, from a lodge where you can walk to the golf courses to cottages, and the golf packages are within what most serious golfers are willing to pay.

Having also played the Harvest Golf Course, Gallagher’s Canyon Golf and Country Club and the Quail and Bear at the Okanagan Country Club on my visit to Kelowna, I think they should be on your must-play list, too.

The Harvest, designed by Graham Cooke, is routed through orchards and vineyards, offering generous bent grass fairways that make it a fun course for golfers of all levels while still making approach shots challenging.

Gallagher’s Canyon, designed by William Robinson and Les Furber, is more demanding, especially starting right off with the No. 1 handicap hole at 400+ yards. The course winds through tall Ponderosa pines along the edge of a picturesque ridge. The shorter 9-hole Pinnacle might be better option for beginners.

Okanogan G. C. offers the Furber-designed Quail, featuring dramatic elevation changes and multi-tiered fairways, and the Nicklaus-designed Bear, which actually is more player friendly. The courses are only minutes from the airport, making one a great place for your first round and the other a great place for one last round before flying home.

There are other golfing options at Black Mountain Golf Club, featuring six par 3s on a par 71 layout, in Kelowna and at such newcomers closer to Vernon like the Thomas McBroom-designed Club at Tower Bend and The Rise, designed by Fred Couples with Fred Bates.

Of course, you should also visit a few of the 60+ vineyards and enjoy some great wines. The valley is the largest producer of ice wines in the world—made from grapes frozen on the wine. I prefer a nice glass of red myself. Don’t forget to try the fresh fruits grown right there, too.