Playing golf on a links course is definitely a different game, one that many of us here in the United States want to put on our bucket lists so we can experience the different challenges presented, but sadly most of us—count me among that number–usually lack the necessary skills to match our play back home.

The British Isles have a majority of the 246 true links courses –that’s the number George Pepper and Malcolm Campbell came up with in their book “True Links.” To qualify, a course first must be near the sea with its swirling winds, feature sandy dune-like terrain and have fast-running fairways and greens. Ireland definitely has a lion’s share of these courses where architects like Old Tom Morris, Eddie Hackett and Pat Ruddy just had to discover holes already formed by nature itself instead of using bulldozers.

The good news for golfers in the U.S. is that the exchange rate of our dollar to the Euro has changed dramatically in the last few years, making it less expensive to play in Ireland. It will still cost more than $200 to play some of the trophy courses in the southwest part of Ireland like Ballybunion, Tralee, Waterville and Lahinch. However, those willing to taking a little longer ride through the green Irish countryside to the northwest part of the island can get more bang for their bucks at some courses that used to be considered hidden gems.

Along with five other writers from the U.S., I got the chance to return to Ireland after an 18-year absence and can see why this part of the island won the European Golf Destination of the Year award in 2011 from the International Association of Golf Tour Operators. The links courses here are definitely world class and just as good as the previous ones I played in other parts of Ireland and Scotland. 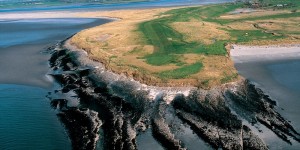 Our first stop after a three-hour coach ride from the airport in Dublin was County Sligo Golf Club at Rosses Point, a Harry S. Colt design amid crumpled dunes on a sandy peninsula with the Atlantic Ocean to the west. Forgetting that I was 71 with a knee replacement, I decided to walk and take a trolley. That was a mistake, especially considering the long ride with little sleep on a crowded Delta flight.

A local teeing off with his daughter informed me to “stay out of the rough” as he walked off the first tee. I didn’t, losing two balls on the first hole. I lost a few more in the high grass before I finished, but did play the par 3s in level par, including a birdie on the 16th where my 8-iron bounced off the pin. Most of the links here unfolded before you as you teed off on the third hole along with views of the Atlantic Ocean beaches and Benbulben Mountain, made famous by the poet W.B. Yates. 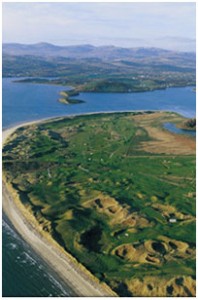 Out second stop was at the Hackett-designed Donegal Golf Links, called Murvagh by locals. It was located on the Murvegh Peninsula in Donegal Bay. Isolated from the rest of the mainland by a thick woodland, the course designed by Hackett with renovations by Ruddy has a fresher look, perhaps because it has been around only 36 years.. The greens were on natural sites, except for a temporary on the par 3 16th, and I had more success on them than any others.

We then had time for an emergency 9 on the Old Tom Morris Links at the Rosapenna Golf Club before a late dinner. Now called the Valley Nine, the holes run along Tramore Beach overlooking Sheephaven Bay and were part of the front 9 in the past. A new front 9 called the Strand 9 was added in 2009 to make for an 18-hole course, but we didn’t have time to play it. The original back 9 of the Old Links is now played separately. With 72 rooms and suites equipped with all the modern comforts, this might be the place that some golfers want to set up shop and stay longer than we did to sample all 45 holes.

The resort’s Sandy Hills Links, designed by Pat Ruddy and opened in 2003, was our assignment the next day. We finally got a taste of Irish rain for about 25 minutes. It is definitely of championship caliber as it can be stretched to 7,255 yards with narrow fairways winding through the dunes, putting a premium on accurate drives. I did find it easier to find yellow balls when I did find the rough. The greens were harder than any others we played, making it difficult to judge approach shots.

While others went off to the Irish Open Pro-Am, three of us ventured over to Ballyliffin, the most northerly courses in all of Ireland, to play the Old Course. Hackett worked in collaboration with several others for the original 18 back in 1973. Ruddy re-routed four holes and Nick Faldo re-did the par 5 14th to form the present layout. The rippling fairways with all kinds of undulations were like riding the waves for me as I drove my buggie. I birdied Faldo’s favorite, hitting 4-iron approach into the wind to 10 feet and making the putt.

Following a day at the Irish Open, we all finished our Irish golfing adventure by playing the Glashedy Links at Ballyliffin, designed by Ruddy along with Tom Craddock, It was longer than its sister course, stretching to 7,200 yards from the tips. The fairways seemed narrower, but it was the fairway bunkers that caused us the most problems–you could not actually try to hit your approach shot to the green, but instead had to just play out of them, losing a stroke.

A bonus for coming this far north is that golfers can get over to also challenge such Northern Ireland courses as Portstewart and Royal County Down, which I played on the previous trip to Ireland.