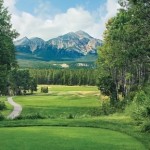 Building the Banff Springs golf course back in the 1920s in Banff National Park located in the Rocky Mountains in Alberta, Canada required a lot of backbreaking work as many teams of horses and mules along with hundreds of men were necessary to clear the sites of timber and rocks so that holes could be created.

Stanley Thompson, recognized as perhaps Canada’s greatest golf course architect, accomplished the design work here and at Jasper National Park to produce a pair of mountain golfing gems that challenged the game’s best golfers of those days with blind tee shots, topsy-turvy fairways and a great mixture of holes.

Thompson liked to place his fairway bunkers, featuring flashed and steep faces, in the paths of most golfers, but they became obsolete with the equipment changes that allowed golfers to just blow their tees shots over them. Like many old, traditional courses, work was therefore necessary to add new tees to lengthen the holes to bring the bunkers back into play and to ensure that they could challenge the game’s longer hitters. At the same time, the courses had to be enjoyable experiences for all the resort golfers from the other markers.

Based on what I’ve seen on my visits, I think Thompson would approve of the “restorations” that have allowed these par 71 layouts to play sort of like he designed them to do 80+years ago.

The breathtaking views of nearby mountain peaks add to the charm of playing both courses during the short season from May to October. Banff Springs, ranked No. 14 in Canada by SCOREGolf Magazine, can be stretched to 7,000+ yards for the original course–the Rundle 9 and the Sulphur 9– and carries a 74.4 rating from those back tees. Resort golfers certainly need to be sure to use shorter markers. There are now 27 holes with the addition of the Tunnel 9 25 years ago. Jasper, ranked No. 8 overall and the No. 1 golf resort by SCORE, is still relatively short by today’s standards, measuring only 6,663 yards from the tips, with a course rating of 71.1. It may be the more fun of the two for the average players.

As might be expected in national parks where wildlife is protected, it’s not uncommon to see elk roaming the fairways or even the paths when walking from the cabins to the golf shop at Jasper. As one of my playing partners found out, watch where you walk or you might step into droppings. Even with a new wildlife corridor at Jasper, retired insurance agent Ray Mullins of Texas remembers seeing a small bear near one of the greens. Further proof of the existence of bears are the outdoor trash cans on the course, featuring the bear-proof latches.

Two of my all-time favorite par 3s are located on the Canadian gems. No. 4 on Rundle at Banff, 192 yards from the tips, is called the “Devil’s Cauldron” and has been selected on many magazines’ best 18 in the world. The tee is perched on a granite shelf while the elevated, bowl-shaped green sits just over a crystal clear mountain lake. Adding to the challenge are five “devilish” bunkers. No. 9 at Jasper is called “Cleopatra” after the Egyptian beauty from way back since cleverly-placed bunkers and mounds reminded some of a curvaceous woman. The green is actually not visible from the back tees at 231 yards and features a drop of 80 feet. Par is a good score here.

All but one of the par 4s on the Sulphur (back side) at Banff play at over 400 yards from the tips, but my favorite was No. 15–the original No. 1 whereby golfers would tee off atop the nearby Banff Springs Hotel. You now play from an elevated tee even further back at 480 yards that requires golfers to thread the needle between trees bordering the fairway and clear the Bow River.

Perhaps the toughest par 4 at Jasper is the 454-yard No. 3, a blind dogleg right where you are supposed to wait until the bell rings to tee off. We didn’t and one of my playing partners almost hit a player in front of us. The approach is made difficult because the elevated green sits into a hillside with a shallow, narrow bunker awaiting long shots like mine. No. 16 at Jasper appears easy enough at 380 yards, but you can’t see the fairway from the tee. Hook the ball a little too much and you end up in Lac Beaver. Push your tee shot and you will be blocked by the trees. The approach is made more difficult as the lake cuts into the front of the green and everything bounces hard to the left and the water because of the slope.

The accommodations at the two Fairmont properties are as different as night and day, although luxurious at both. Banff features a century-old castle-like structure with 800 rooms. Jasper features more than 400 cedar chalets and authentic log cabins. The luxurious lake front chalet where I stayed had four bedrooms and reportedly hosted Queen Elizabeth on her visit.