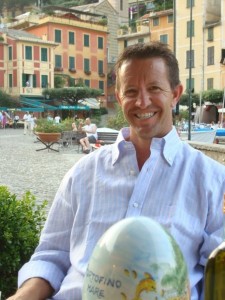 If you ever saw the classic movie “All The President’s Men,” when Deep Throat obliquely steered Woodward and Bernstein into solving the mysteries of Watergate, his advice was simple:  “just follow the money.”  Golf course architects are doing just that.

New projects a few and far between these days, so while renovation is the lifeline for many talented designers, the impact of China on the business, like a tsunami, is going to eventually ripple through our golf culture…big time.  And like surfers catching the big waves of Oahu’s North Shore, well-known and well-respected architect Dana Fry is riding the crest of China’s nouveau multimillionaires.

As a shaper working for George Fazio, Fry learned hands on the skills needed to design golf courses.  But after serving his apprenticeship, he moved on to a highly successful twenty plus year collaboration with Dr. Michael Hurdzan in Columbus, Ohio that developed into a full- fledged partnership in 1996.  “He learned from the textbook side and I learned from a bulldozer.  We’re vastly different, even in our personalities.  He’s low key and even keeled, while I’m pretty high strung and energetic, putting it mildly.”

The different styles meshed well, and they developed an especially strong reputation for creating environmentally friendly facilities nationwide.  In 2006, an invitation to speak at a conference in Beijing, China set Dana’s life and career on a wildly different path.  “We were busy with construction in America, but there were no new jobs coming in.”  While it was ostensibly a meeting to help launch China’s first golf magazine, the hidden agenda was fronting architects who could be part of a syndicate for developing lucrative projects in a vastly untapped market.

Within the end of the year Fry was jetting back to south China to discuss two projects on Hainan Island.  “Once I started going over for meetings I kept hearing about stuff going on in Thailand, Vietnam and Korea.  I became a relentless traveler.  I went from only going outside of America for vacations to virtually living outside of America thirty weeks a year.”  In fact, company income went from 100% in the USA in 2006 to 40% in 2007.  Now 95% of the work is overseas, with about 90% in Asia.  “Frankly put, our company would not have survived if it were not for Asia,” Fry admits.

Fry says doing business in China is so complex that it can’t fully be explained.  “First and foremost, it’s not about qualifications of the firm, but applying people skills and becoming friends.”  To build that bridge you must be prepared to have dinner with your clients, play golf with them, even go drink and croon at a karaoke bar.  “A lot of things can happen in a karaoke bar, and they want to feel you out, see how you react and what your character is.”

Fry had to gird himself for long dinners with hosts who were heavy drinkers and smokers. “The preferred liquor is mau tai, very potent, and as everyone at the table toasts you as the guest of honor…you have to toast them back, “so they’ve had two shots and you’ve have over a dozen.”  Often the menu included things you would you’d have for a pet rather than put in your mouth.  “On my second trip, there was a dog sitting on my plate with its head chopped off.  You have to keep reminding yourself you’re a guest in their country.”

Donald Trump has developed and bought a host of high end courses in America, but based on the comments he’s made blasting the Chinese over currency, jobs, and other things, don’t look for the tea totaling Trump to be sitting at the dinner table taxing the translator’s skills with grandiose adjectives of how fabulous his golf courses would be for China.  But many others are.

There are now over five hundred golf courses in China.  While still a minor sport, the number is growing rapidly.  What drives the market?  “In almost every instance the courses are built to sell real estate, period,” Fry explains, “and they’re so used to living in the cities, in confined space, that they love the open space, the green space.  The stock market is new to them, and they feel the greatest investment is a home, and it will stay in their family for generations.”   Sounds a lot like post war America, no?

But will they also go down the path of the American model in over spending on lavish facilities that come back to haunt you when demographics and economies change for the worse?  Fry doesn’t have the answer, but knows that you don’t tell those with the gold that they’re being foolish in how they spend it.  While he admits some architects are doing the “pack ‘em in” style of architecture, for safety concerns alone, he stays away from that kind of project.

Still, when the people Dana Fry is working with spend, they spend BIG.  “The Chinese people are very status driven,” says Fry.  “When they have the money they want the Rolexes and Armani clothes.  Many have come from nothing to mega wealth.  So if one guy has a golf course built with a 125-thousand square foot clubhouse, the next guy’s has to be bigger.  It makes no sense from an economic standpoint, but these are some of the biggest clubhouses being built in the history of the world…up to 250-thousand square feet.  You look at them and you just can’t believe what you see.” 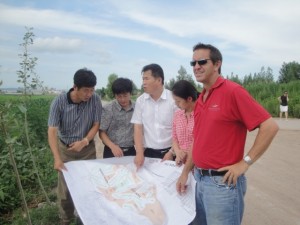 Coming from a ground up background, Fry says that while he can rely on a core of experienced aids, it’s a free for all dealing with Chinese laborers who have virtually no experience in golf construction.   And managers who are minions of the owners cut deals with their own network of associates, so everyone in the chain profits at the expense of material specifications from the architect.  “The quality of Chinese materials in most cases is not even close to being equal,” Fry laments.  And because most of the homeowners are not golfers, with little play, cost cutting causes turf conditions to deteriorate.

Five years of intercontinental commuting is enough for Fry.  He is moving to Hong Kong thanks to the generosity of a client who is giving him a place to live as part of his contract.  “Its in central Hong Kong, and something I could never afford,” says Fry, “with a thousand square foot rental space in the neighborhood of six to ten thousand dollars a month.  But I’m moving here because arguably, it’s got the best airport in the world.”

Because Hong Kong was under British governance for over a century, its highly westernized, and as a special economic zone, is protected for the next quarter century from repressive mainland party rule.  With the huge population and the special importance China puts on the Olympics, Dana Fry might be gainfully employed for a very, very long time.  So after dinner he doesn’t need the cookie…he already found the fortune.

4 Responses to “The Wild, Wild East-”