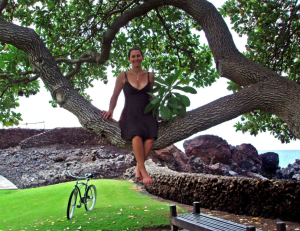 That’s what Hawaii can do to you, if you let it. I was so far removed physically from home and mentally from adulthood that I was able to detach from not just my responsibilities and demands but, more important, I was able to put the pursuit of a simple smile in their place. And while I’m sure the rest of the Hawaiian Islands are equally suited for such endeavors, the quietude and scale of the Big Island provided even more incentive for me to contemplate complete satisfaction. 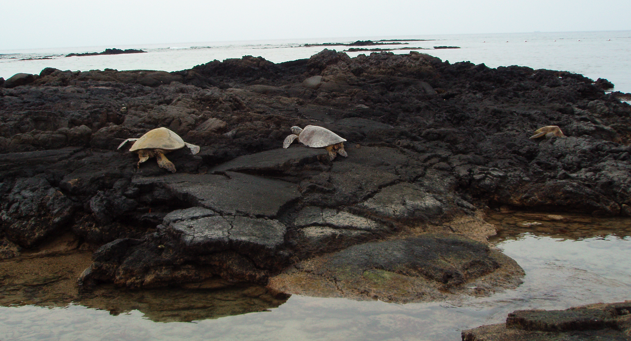 At just over 4,000 square miles, the Big Island is more than twice as large as the rest of the Hawaiian archipelago combined. It takes a full day just to drive around it, and in that time behind the wheel you can see everything from rainforest waterfalls that drop more than 400 feet and cattle grazing on verdant ocean view grasslands to desolate lava fields and, intermittently in winter, snow-covered volcanic peaks.

Yet, during our time on the island I found that some of the best spots aren’t even counted among those 4,000 square miles; they are just offshore. So, for every hour I spent chipping and putting, there was an equally satisfying hour awaiting us in the water. And nowhere on the Big Island is that mix of ocean and golf more perfectly combined than along the Kohala Coast where a foursome of resorts along one 20-mile stretch of coral reefs and lava rocks offer something for any taste.

The first property along the coast north from the Kona airport is the Four Seasons Resort Hualalai where a serenely private 243 rooms, six swimming pools and one saltwater snorkeling pond are set on a half-mile-long beach. Such privacy is a benefit best appreciated from the outdoor shower located off each ground floor room, where orchids grow in the lava rock walls and a bamboo roof provides just enough shelter to make you feel comfortable but not so much as to keep the ocean breeze from mixing with the steam.

As the Champions Tour pros find out every January when Hualalai hosts what is now the Mitsubishi Electric Championship, there’s more to this Four Seasons than showers. The Jack Nicklaus-designed course at Hualalai runs like a bright green river among the intense black lava rock formations and it is as pleasing to see—with lava tubes and the historic Hawaiian trail just off the fairway—as it is to play. Thankfully, there’s enough grass to keep your bad shots out of the ball-destroying lava fields…most of the time. 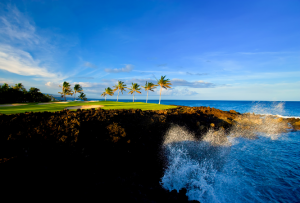 Up the coast at Waikoloa Beach Resort, the two golf courses can leave you forgetting about the water as well, that is unless you have kids or grandkids. If that’s the case, be prepared to find yourself splashing in the Hilton Waikoloa Village’s giant pools, sliding down waterslides, swimming with dolphins with the Dolphin Quest team or paddling within the four-acre lagoon.

The size of Waikoloa is enough to keep most anyone busy for a week, which justifies both the monorail and the canal boats that connect the property’s three separate towers. I noticed that kids vacationing here become almost immediately adept at covering the grounds quickly and proficiently—and with the same smile on their faces that I would find later.

Adults can become equally as proficient at navigating the golf courses, which are set away from the great family resort enough for parents to get a little break on the greens, even if their score doesn’t reflect it. Waikoloa’s Beach Course offers the opportunity to play in the shade of coconut palms as you try to avoid hitting into the Pacific (hole 15), while the Kings’ Course requires navigating pot bunkers on a links-style layout with views of two 13,600-plus-foot volcanoes that loom above. 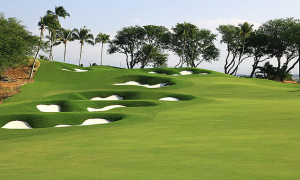 At the far northern end of the Kohala Coast, the recently renovated Mauna Kea Beach Hotel and its Robert Trent Jones Sr. golf course have been the benchmark for Big Island golf since Laurance Rockefeller opened the doors in 1965. And with the restoration now complete, the resort looks to attract visitors for another 40 years and more.

Mauna Kea’s sister resort, the Hapuna Beach Prince Hotel is nearly 30 years younger than the original Mauna Kea resort and thanks to its challenging course—with a hillside layout and narrow fairways that rise to more than 700 feet in elevation—and direct access to one of the world’s best beaches it was more than capable of continuing to attract loyal visitors while the original was renovated.

But it was at Mauna Lani Resort where Rebecca and I found contentment. After finishing our self-guided bike tour of the original Francis H. I‘I Brown Championship course at Mauna Lani, we peddled our way back to our room knowing that the next day we’d be heading back home.

On select dates throughout the year, guest are given the opportunity to play the original 18 holes as they were first laid out before the addition of two additional nine-hole routings divided the original into the North and South Courses. As I went to sleep on our last night on the Big Island, I thought that playing the original layout and then riding a beach cruiser across it would be the highlight of this trip. But Hawaii wasn’t done with us yet.

That night, Rebecca’s now familiar refrain of, “All I really want to do is swim with a sea turtle” had changed as well. In its place that evening, she began to mutter, “I just wish we would have seen some turtles.” Throughout the week, we snorkeled at Hualalai, paddled at Waikoloa, swam at the beach in front of Hapuna and snorkeled even more at Mauna Lani. And we saw plenty of colorful and curious fish, but not one of Hawaii’s revered giant green sea turtles, the honu.

When we awoke the next morning, there was still time to get in the warm Pacific waters one last time before we left. From our room we had noticed a few kids splashing in the small lagoon, but by the time we got our feet wet they had traded the ocean for one of the nearby hot tubs as the growing clouds overhead began to sprinkle us with rain.

To say the conditions were less than ideal would be an understatement, but it was hard to turn back once we were kicking our way out. When Rebecca pulled on my arm and pointed to the surface, I could feel the cool raindrops landing on my back and knew she was done. Even the colorful parrotfish we swam with just a day earlier looked dull and depressed in the murky haze that had been kicked up by the coming storm.

But it was then, out of the corner my eye, that I saw her freeze. Her hands were straight back at her sides and her lower body, having lost its buoyancy, began to sink. Her eyes, however, were full of life and happiness and unfettered enthusiasm.

Floating in front of her was a green sea turtle. With its fins treading water and her smile growing bigger, the two of them stared at each other for what seemed like minutes. And that, to us, was complete satisfaction.

This article originally appeared in Tee It Up Magazine.