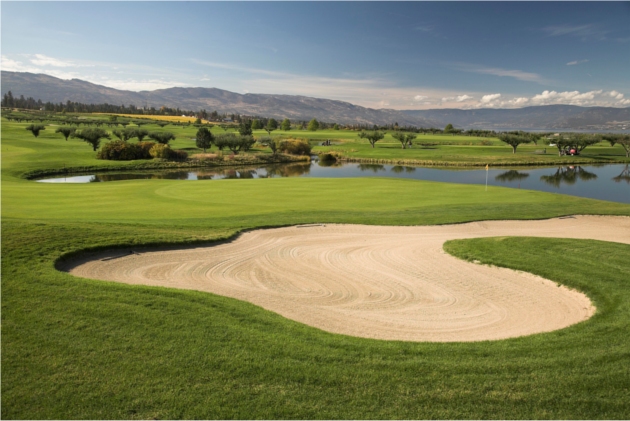 Amid the Vineyards and Fairways in Okanagan Valley

Aside from those living in the Pac NW, flying into the town of Kelowna, in British Columbia’s Okanagan Valley, may take the better part of a day after a likely layover in Seattle or Portland. However, once you arrive at the far north end of the Sonoran Desert and the home of icewine and Canadian golf, it’s a quick transition into a four-day itinerary that will leave you awash in a sea of reds, whites and greens.

Day One: First, head to The Harvest Golf Club, where it will be hard to believe that there really is a Sonoran connection between this course – with its grapevines and apple, peach, cherry and pear orchards lining the fairways – and the arid Arizona counterparts; but technically, the northern end of the desert zone that starts south of Arizona does stretch all they way to the Okanagan. Of course, if you visit during the peak of summer, you can expect to experience a few warm and dry, but not close to Phoenix-like, days.

On the course, the greens are as good as most in Arizona, but the rough benefits from the wet winters and fast northern growing season. There may not be any ball-snatching cholla cacti off the fairways here, but the tall grass can make a ball disappear just as fast.

After the round, take the bridge over Lake Okanagan and visit the Mission Hill Family Estate winery. Founded in 1966, Mission Hill has won several awards for its wine, and the estate’s architecture is nearly as impressive. Pick up a bottle of the 2005 Select Lot Collection Riesling Icewine. Harvested at night when the temps were a chilly 10 degrees outside, this icewine is sweet and complex and may just remind you of your round at The Harvest.

Day Two: Wake up early on the second day and make your way to The Okanagan Golf Club (OGC). Set nearly a par-five’s distance away from the Kelowna Airport, OGC’s two courses are surprisingly secluded and quiet. Start off with The Bear track, where you’ll be staring down fairways lined with tall pines until the turn.

Furberize Yourself on The Quail Course at Okanagan Golf Club

After lunch in the clubhouse, tee off on Les Furber’s The Quail. Furber is a Robert Trent Jones Sr. disciple who has been creating western Canada’s best courses for nearly 30 years. On his Quail design, you’ll want to use iron off the tee more than once, so be patient as you battle the pine limbs that will inevitably try to cajole your ball out of bounds.

If you get out early (or make the mistake of only playing 18 at OGC) there may still be time to take the short drive to Summerhill Pyramid Winery. As the largest certified organic vineyard in Canada, Summerhill creates some special wines. See for yourself on a tour of Summerhill’s wine-aging cellar – a four-story replica of the Great Pyramid of Giza in Egypt.

Make Room for a Bottle of CedarCreek Meritage

Day Three: Don’t drink too much wine at Summerhill the night before, because on the third day you’ll be teeing up at Gallagher’s Canyon Golf and Country Club. To start the round, you’ll have to face the No.1 handicap hole, with the entirety of the clubhouse right behind you to boot. Literally, it looks like the first tee box should be under the roofline.

The views of the canyon for which Gallagher’s is named are equally dramatic, but the par-five No.9 has perhaps the most spectacular of these, with a steep  descent running up the entire left side of the hole. At the bottom is the river, but the white out-of-bounds markers will make it clear that you want to stay well right. The 9th hole is just the first of three par-fives in four holes, so reserve some energy.

Post-round, head back down the hill and south to CedarCreek Estate Winery. The picturesque winery, which was founded in 1986 by Canadian senator Ross Fitzpatrick, has been named Canada’s winery of the year. While visiting, try to secure some of the Platinum Reserve wines – the Madeira and Meritage won’t disappoint.

Day Four: After sampling some of CedarCreek’s finest the day before, navigate north 45 minutes to Predator Ridge Golf Resort and on your last day in the Okanagan you’ll revel in one of the most serene sights north of the border. From the resort towers, the two courses (The Predator Course and The Ridge Course) slope across the hills and in and out of the trees like they were painted on the earth with a master’s hand.

But don’t kid yourself by thinking that playing either course will be a stroll through a museum. The greens are viciously fast, and by the end of your day there will certainly be three putts you’ll remember with pride. While the Predator Course was designed by Furber, the new Doug Carrick-designed Ridge Course was named a best new course for 2010. Play both, because the memory of following your ball down the almost labyrinthlike trail of manicured grass laid through the thick forest will stay with you for awhile. 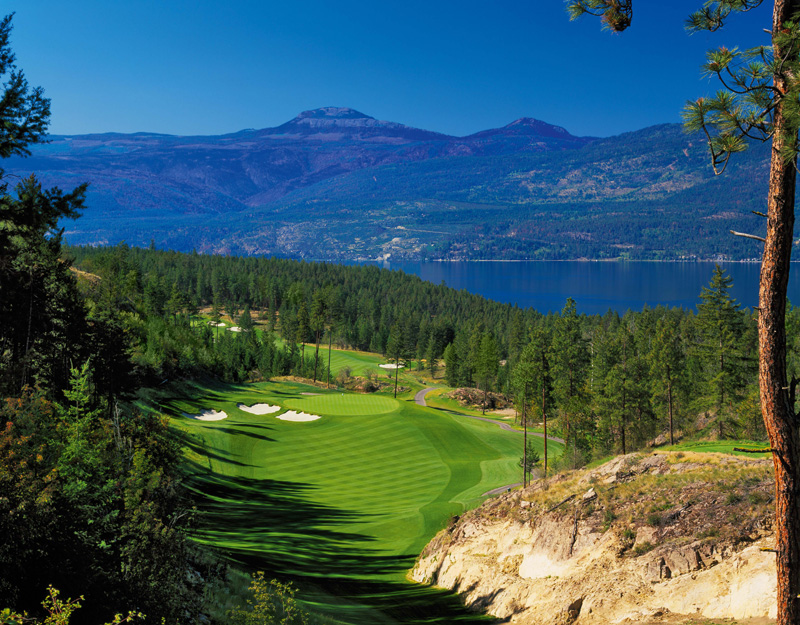 It'll be Hard to Say Goodbye to Predator Ridge

In fact, after your first round, stop by the lodge and change your flight home. That way you can play the second course in the afternoon and then enjoy your favorite of the two all over again the next day. There is no way anything this good should be passed through so quickly.

Play swiftly though that next morning, because before you leave the Okanagan Valley you’ll want to make one last stop at the Gray Monk Estate Winery on the drive back to Kelowna. Enjoy some of the Latitude Fifty Series blended wines, coined after the 50th parallel on which the winery sits. And, if you still have room in the bag and haven’t surpassed the one-liter limit imposed by US Customs, pick up a bottle of the Gray Monk Ehrenfelser Icewine. It’s the perfect souvenir to sip while reliving your four, or five, day tour of the Okanagan.