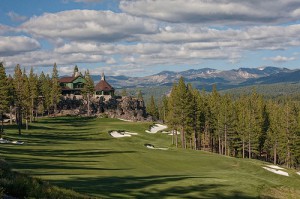 The 18th hole at Martis Camp, site of the 66th U.S. Junior Amateur, with its Camp Lodge on a rock outcrop overlooking the green.

Pencil-slim and a few years shy of needing a shave, many of these golfers still unleash drives that audibly whistle through the Ponderosa pines of California’s High Sierra, carrying nearly 300 yards and rolling more on firm fairways. Between Lake Tahoe and the town of Truckee, the 7,675-yard Martis Camp golf course is the longest in the 66-year history of the U.S. Junior Amateur, which will be held here later in July.  And though altitude negates some of that length, USGA Executive Committee member William “Skip” Gist says that, “The winner will have been through a bit of a grind.”

The droll comment may be the understatement of the year.

Whoever prevails in the 36-hole finale on this coming July 27th will have played 11 rounds in eight days. He’ll have won six match-play contests in a row, potentially including 36 holes or more on each of the last two days.  And it’s all while walking the entire course, over rangy and sometimes steep terrain, and in the gaspingly thin air at more than 6,000 feet above sea level.

It is thus no wonder that veteran PGA Tour professional Corey Pavin has called the U.S. Junior Amateur the toughest of all USGA events.

Open to boys who have not yet reached their 18th birthday, the grind is already underway at more than 60 qualifying events across the nation. On July 20, 156 survivors will converge on the spectacular Tom Fazio-designed Martis Camp golf course, which opened in 2008 and is hosting its first USGA championship. After a pair of practice rounds and two rounds of stroke competition, the top 64 will start eliminating each other through match play.  (The quarterfinals and finals will be aired on the Golf Channel, July 26 & 27).  And though the title doesn’t guarantee a pro career, the winner joins esteemed company that includes Johnny Miller, David Duval, Hunter Mahan and three-time champion Tiger Woods.

The event itself is remarkable in many ways.  For one thing, it’s a national championship. For another, Martis Camp is opening the tournament to the public, free of charge. No ropes separate galleries from the players and their caddies, giving the spectators a chance to see future stars close and personal.  Competing for neither a school nor money, these youngsters may be playing high-level golf, simply for the love of the game, for the last time in their lives.

Once a player moves past junior amateur age group, golf can often “turn into a job,” said PGA Tour pro Ricky Barnes, who by phone joined a Martis Camp/USGA press conference in mid-June.  “By college you’re playing for your scholarship.  On Tour you have to take care of business.” A two-time participant in the Junior Amateur, the 2002 winner of the U.S. Amateur and a member at Martis Camp, Barnes clearly brings perspective to this event.

Barnes admits to being overwhelmed by the surroundings during his two Junior Amateur appearances, in which he didn’t get past stroke play.  But the 2002 U.S. Amateur?  “Growing up in the U.S. and holding a USGA national championship trophy is the ultimate bonus.  I’m still find myself driving in my car, remembering and breaking into a smile.”

As the USGA likes to point out, the U.S. Junior Amateur is the only national golf championship that Jack Nicklaus was eligible for but did not win. Founded in 1948, this tournament has not always been a great predictor of future success.  Only a handful of names stand out among the champions. And yet, the sport and its participants have changed. 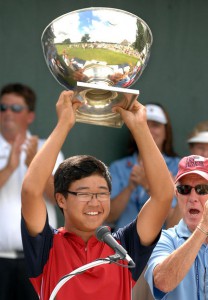 Today’s juniors aren’t just golfers, but athletes who in the past might have focused on a different sport. They practice long hours and are prepared for tournaments at an ever-younger age.  A 14-year-old, Jim Liu, won the Junior Amateur in 2010.  Last year, Liu was runner-up to Korean-born Andy Hyeon Bo Shim, 17. China’s Tianlang Guan, also just 14, made the cut in this year’s Masters.

“I have little doubt that many of these kids will be stars in college, and some of them will be stars on the PGA Tour,” says Martis Camp Head Golf Professional Gus Jones.  Jones attended the last two Junior Amateurs in person, to size up the field his course would host.  Not all were skinny kids. “Some of these fellows are six feet tall and weigh 180 pounds,” he explains. “And they swing with a clubhead speed of a Tour pro.”

While the power of the players is impressive, so is the Martis Camp course.  The Tom Fazio design blends sublimely into the Martis Valley and forest, with tees that frame views of nearby Lookout Mountain and its Northstar-at-Tahoe ski runs, and vistas of the rugged Carson Range to the east.  Fazio took advantage of natural elevation changes for tee boxes, and fashioned classic bunkers that are deep and intimidating.  Nearly all of the gently sloped greens include surrounding areas that will give players safe bailout areas, if they can be spotted. A couple greens feature entryways for a crafty roll-up punch shot, even when the pin is tucked behind a menacing bunker.

Although Martis Camp is member-friendly, Superintendent Scott Bowers has ways to toughen the track. For example, the hard and fast turf that the USGA favors for championships may enhance driving distance, but on canted mountain fairways can feed a blast into the forest. Taller grass that keep member’s approach shots from skidding past greens is now cut short and tight, while the 3.5 inch primary rough flanking fairways will punish errant shots.  Most challenging will be pin placements that Martis Camp members almost never see, on sections that were incorporated into the greens by Fazio more than six years ago, expressly for future tournament use. 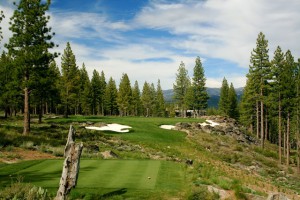 The par 3 17th hole at Martis Camp is a small target, well-guarded by bunkers and a rock outcropping.

Course knowledge is critical, and the players and caddies have only two days to learn about the nuances of greens, and also the influence of the altitude and thin air, which leads to shots that travel perhaps 10 percent longer than at sea level.  Recommends Barnes:  “Players and caddies should spend a lot of time during practice rounds charting yardages for their irons.”

For spectators, Jones suggests that many match-play contests will end around the 15th and 16th holes.  “The 15th is a reachable par 5 with eagle possibilities, but at the same time errant shots will be penalized.  The par-4 16th may be reachable for the longest players in the field.  The length of the hole and the angled, multi-tier green will create excitement for matches that reach this point.”