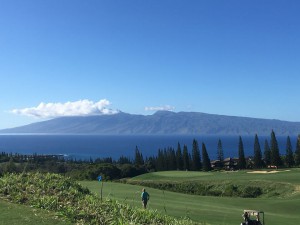 With Molokai and its usual cap of clouds in the background, Maui and the Plantation is heaven on earth.

When viewers tune into today and tomorrow’s broadcast of the Sentry Tournament of Champions – – January 2 through 5, 2020 – – the star of the show probably won’t be any of last years PGA Tour winners, but instead will be the azure waters surrounding Maui, and the sublime Plantation Course, which over the past year has been totally renovated at an estimated cost of about $10 million.  Fairways, greens and the rough have all new grass, underlined with new drainage and maintained with a new irrigation system.  All the bunkers have been rebuilt with new sand atop cappillary concrete linders – which promotes rapid drainage and prevents channeling during rain – and tees have been laser leveled.

And yet, unless one has played the course dozens of times, it probably won’t look much different from when Ben Crenshaw and Bill Coore designed and built the spectacular mountainside course on the site of an old pineapple plantation  27 years ago.

Oh, some bunkers have been removed and others moved.  New professional tees have been added on a few holes.  Some greens were expanded to allow for more hole locations, with others reduced making for smaller targets.  Crenshaw and Coore, who were hired to design and supervise the renovation, and brought back many of the shapers who did the original work when their were in their 20s and who are now in their 50s, made about 80 changes in all, largely subtle. What is most amazing is that within nine months of turning the course into a brown-site, the grass everywhere is thick and lush.

Thus, the Troon managed Plantation will play a lot more like it did when the layout first opened, with the Celebration Bermuda grass on the firmer and faster fairways allowing very long rolls on downhill tee shots.  Over the years, the course had began to play longer, which made it exceptionally difficult for resort guests who predominate play 51 weeks a year.  Although distance is seldom an issue for professionals who usually play an aerial game, the resumed roll and Plantation’s downhill and downwind holes could make the ground a factor during the Sentry.

So, the course is much the same and also different.  “It’s like when you have a special piece of art, or something really special to you, and you get a chance to dust if off and make it new again,” said Coore in a statement.  “This (was a) thoughtful restoration and refining process, but it’s not a redesign.  We are very happy with the way the course looks and the way it has gone through the past nearly three decades.”

For amateurs, the renovated Plantation still has teeth, lots of teeth.

One of the Best Ads on Television 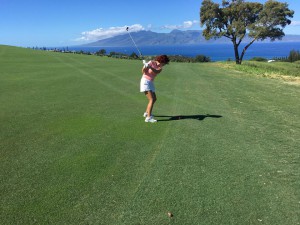 From the seventh fairway the second shot is a downhill dogleg right.

With only about 35 entrants, the Sentry is a rather intimate event for television viewers, who can see almost four entire rounds of many golfers.  But the green grasses, pines and the striking blue waters in the channel between Maui and Molokai, are also visual balm for folks living in North America’s colder climes.  Maui couldn’t pay for this kind of advertising, and the tournament is the darling of the visitor’s bureau.

It’s actually not the first even of this type.  Pasadena started its New Year’s Day parade and Rose Bowl football game more than 100 years ago, primarily to lure new residents from the frozen Northeast and Midwest to sunny California.  It worked, and even more so with the advent of television.  With exposure from the Sentry, Maui’s hotel rooms and condos are pretty much assured of nearly full year-round occupancy, and hour-long lines for breakfast at the fabled, ocean-side Gazebo just down the road on Napili Bay.

Plantation is one of the flagship properties – – and perhaps the most visible – –  that are managed by Troon, the Scottsdale, Arizona based firm that is the world’s largest golf management company.  Plantation ownership and management not only brought in Coore and Crenshaw, but sent in the firm’s Agronomy Team, and added the talents of Mark Rolfing, a Golf Channel commentator and long time resident of the island.  Other projects include the renovation of Plantation’s practice area, a renovation of its Golf Shop, clubhouse, and modernization of the nearby Kapalua Golf Academy. 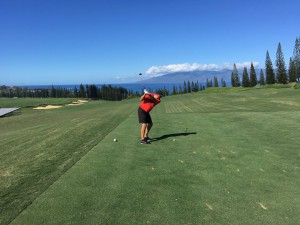 The view from Plantation’s first tee.

“All of our enhancements are geared toward improving the overall golf experience for our guests, while ensuring the Sentry Tournament of Champions remains a top stop on the PGA Tour,” said Alex Nakajima, general manager of Kapalua Golf and Tennis.  “We’re excited to welcome locals, Maui visitors and the PGA Tour’s best back to the new Plantation course.”

Visitors will pay about $360 for a round at the Plantation, and kamaaina rate is $140.  You’ll also lose a few golf balls, just about guaranteed.  But if one can afford it the price is rather meaningless, given that it bathes the golfer with the taste, look and feel of true Paradise.