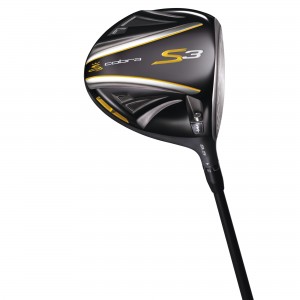 The new S3 is a game improvement driver will a new configuration of its sweet spot.

Cobra Golf’s Pete Rivera stopped by the Marin Country Club last weekend, for a demo day introduction of the company’s new S3 irons and driver, both of which feature a radical and unconventional way of positioning the clubs’ sweet spot.  Called the E9 Face Technology, it expands the sweet spot on the driver by 30 percent.  Perhaps more important, instead of designing a club with a circular sweet spot in the center of the face – – where you’d figuratively want players to make contact with the ball – – the S3’s is in an larger oblong pattern, tilted up and towards the toe.

Instead, they created a sweet spot where players are more likely to make contact with the ball.

Indeed, after testing golfers hitting more the 25,000 shots, Cobra found the 99 percent of those shots fell into an elliptical pattern that ranged from low heel to high toe, and not dead center.  It was a simple discovery, maybe almost too obvious.  But it explains a lot about less than robust shots launched from all too many teeing grounds.

Rivera has yet to get much feedback from customers on the design, simply because this was his first stop with the new clubs that had arrived only a couple days before.  “You’re actually the first person in this territory to hit this driver,” he observed, taking the plastic wrapping off the grip.

I tested an S3 with specs similar to my Ping Rapture V2, which I recently listed on The A List as my favorite piece of golf equipment.

The new driver had 10.5 degrees of loft and a regular flex and a new lightweight Fujikura Blur shaft, which made the head of the Cobra feel a bit heavier than my Ping.  Both clubs had mid-shaft kick points.  “Looking down at the club the top profile is similar to models from past years,” explained Rivera.  “It’s a traditional pear-shape look that golfers seem to prefer over time.”  The face of the club is, however, taller.  And the weight has been rearranged in the rear to account for the larger and oblong sweet spot.

I hit at least three dozen drives with the Ping and another three dozen with the Cobra, interchanging the clubs every couple strikes.  Rivera didn’t have a launch monitor with and Marin uses limited flight balls at its range, so I wasn’t able to get technical specifics.  But I had a pretty good chance to compare shots with downrange target greens.  My Ping gets more altitude – – and probably too much, costing me distance.  It was clear that on flush strikes, the new Cobra granted me five to ten extra yards of distance.  There are two major reasons.

One, the Cobra produces a slightly more boring trajectory.  And two, the configuration of the sweet spot puts meat into swings that are off only a few dimples.  If you look at the driver face my old Ping, misses are usually up and out slightly toward the toe.

The S3 also has adjustable flight technology, or three simple face-changing angles.  Most of my drives were reasonably straight or had a light fade. Had there been more time on Sunday, I’d have liked to try a closed face setting to see if I’d get an automatic draw.

I also didn’t not have time to test the irons, which feature a progressive “Sweet Zone.” As with drivers, most iron sets have the sweet spot on the center of the face. Cobra discovered that with longer irons, golfers hit in more a horizontal elliptical pattern. In mid-irons, golfers hit in an oval pattern. In short irons, golfers hit in a circular pattern.  To account for this, the new S3 irons use ultra high strength steel in long and mid-irons, enabling them to thin out the face and increase flex to get more ball speed and forgiveness from the elliptical sweet spot.  Mid-irons to shorter club progress from an oval to circular.

As more and more members came by the try the new snakes on the range – – as well as some of Cobra’s classics like the Baffler Rail rescue club – – Peter Rivera was busy unwrapping grips.  While there have been lots of new configurations of driver heads in the past few years, variable weighting and other wrinkles, a newly formed and shaped sweet spot clearly puts a little bite in this Cobra.

One Response to “Snakes on a Range: Cobra’s New S3 Sweet Spot”