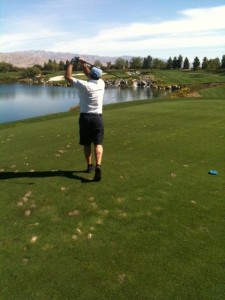 GRW's Jeff Wallach doesn't care about the Classic Club's water when shooting for the pin. Note his cool AUR shirt.

Dressed for high 80’s Palm Desert heat in our ultra-light-weight AUR environmental “Aware” shirts, the Golf Road Warriors loaded up their Callaway custom-fitted Performance Center custom-fitted golf clubs, a surfeit of Hex Black balls and headed out from the JW Marriott Desert Springs Resort for a round of golf with several pals at the nearby Classic Club, to play a match scored in real time by the new Grow the Game Golf app, after which three of us had a massage at the fabulous Two Bunch Palms Resort and Spa in Desert Hot Springs, and finally a highly entertaining dinner presided over by a knife-juggling chef at the Marriott’s Japanese steak house, Mikado.

Yes, that sentence covered most of the day’s sponsors, activities and venues, and is indicative of the jam-packed agenda of the Palm Springs Golf Road Warriors during the last week of February.  Whoever won at today’s Accenture Match Play tournament will remain anonymous – – at least with us and for now.   And given what we’ve been doing on the golf trip, none of us particularly care.

Who’s got it better than the Golf Road Warriors?  No one!  Not even the tour pros now in Arizona, all but one of whom will be a loser.

A Challenge at the Classic

For some reason I kept thinking the name of the Classic Club’s golf course was The Challenge, but that’s probably because I may have lost half the golf balls provided by Callaway on our first day of golf, while fearing my high score was going to short-circuit the Grow the Game Golf application.  At least ten of the holes of the Arnold Palmer design are arching dog legs with water to the left or right, and two more are fronted by ponds and/or creeks.  With 30 acres of water features, that’s a lot of aqua for a desert.

There’s also plenty of fairway if you hit them straight, with rolling terrain and wide landing areas, flanked by pine trees, straw ground cover and five sets of tees on each hole.  In fact, the Troon-managed property is widely considered one of the better championship golf courses in a region with a lot of very good tracks.  The course was in the rotation for the 2006, 2007 and 2008 Bob Hope Chrysler Classics.  When it opened roughly six years ago the Classic landed on numerous best new courses lists, including rankings of public courses and desert courses.

The GRW were also joined during the round by a couple of kindred spirits.  One was Larry Bohannan – – clearly the superior stick in our foursome – – and a long-time sportswriter for the Desert Sun and mydesert.com. He’s been covering golf in the Coachella Valley since shortly after the first Skins Game was held here in the late 1980s.  That tenure and attention has made Bohannan an astute historian to what happens in the public golf world and what goes on behind the scenes.

We were also joined by Grow the Game Golf investor and brain-trust member Reuben Padilla, who came up for the day from Orange County.  Padilla helped GRW’s John Strawn fire up the application on his smart phone, and patiently explained how it worked so that our pal actually understood how it worked.  He was also in my cart, encouraging good shots and placing blame on the elements for those that were bad.  Although you wouldn’t sense it at first glance, the affable

Our dinner at the Mikado also involved flames.

Padilla is a leader.

During 20 years as a U.S. Marine he flew F-4 Phantoms and then F/A 18 Hornets – -some of fastest, most maneuverable and meanest aircraft in the skies – – and concluded his career as a wing commander at Miramar.  He and his buddies used to make fun of the Navy guys at Top Gun.  Now, with his involvement with Grow the Game Golf, flying is just a memory and his golf game is getting attention along with the business, and is getting better and better.

According to the application, I ended up in eighth place in the tournament.  Hey, I’ll take a top-ten finish every time.