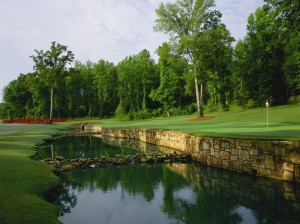 Bob Cupp.  Jim Engh.  Rees Jones.  Jack Nicklaus.  Tom Fazio.  Those are the golf course architects I’ll be facing off against next week at the renowned Reynolds Plantation golf resort, an hour from Atlanta in Greensboro, Georgia.

There are any number of ways to plan a sensible strategy: going through my clubs to figure out the best set for the specific types of challenges set by these architects, or having a variety of different golf balls for various kinds of shots; picking up an extra Trion Z bracelet to balance my magnetism and create game-enhancing negative irons; hitting the practice range all week.

But I believe my best strategy in fierce competition has to do with, well,  apparel.  I think I’ll try to choose an item of clothing that best matches up against each designer.  More specifically . . .

1)  I’ll wear my hometown Pumpkin Ridge Golf Club shirt, in black knit, to psyche out Cupp, who designed the course.  I’ve shot some of my best rounds out there and the shirt lends me confidence. 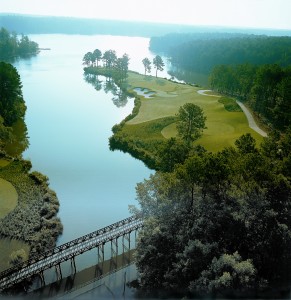 2)  Something from an Arnold Palmer Course for playing the Nicklaus layout– maybe the green one from Latrobe Country Club, given to me by friend and colleague Chris Rodell, who has worked for Palmer.  It should serve as a reminder to Jack that he’s not the only golf icon on property.

3) I know exactly what to wear when I take on the Rees Jones Course– a navy blue windshirt with a logo from Robert Trent Jones II, his brother’s company.  The siblings give new meaning to the idea of rivalry.

4) For the Fazio course, a pair of Tommy Bahama shorts.  I have no idea why.  I just like the shorts.

5) Jim Engh is another tough one, like throwing a fastball to a lefty.  I don’t know what to expect, as this may actually be one of the first of his courses I’ve ever played.  Maybe the lucky socks from Kentwool that I was wearing last time I broke 80.  And yes I’ve washed them since then.