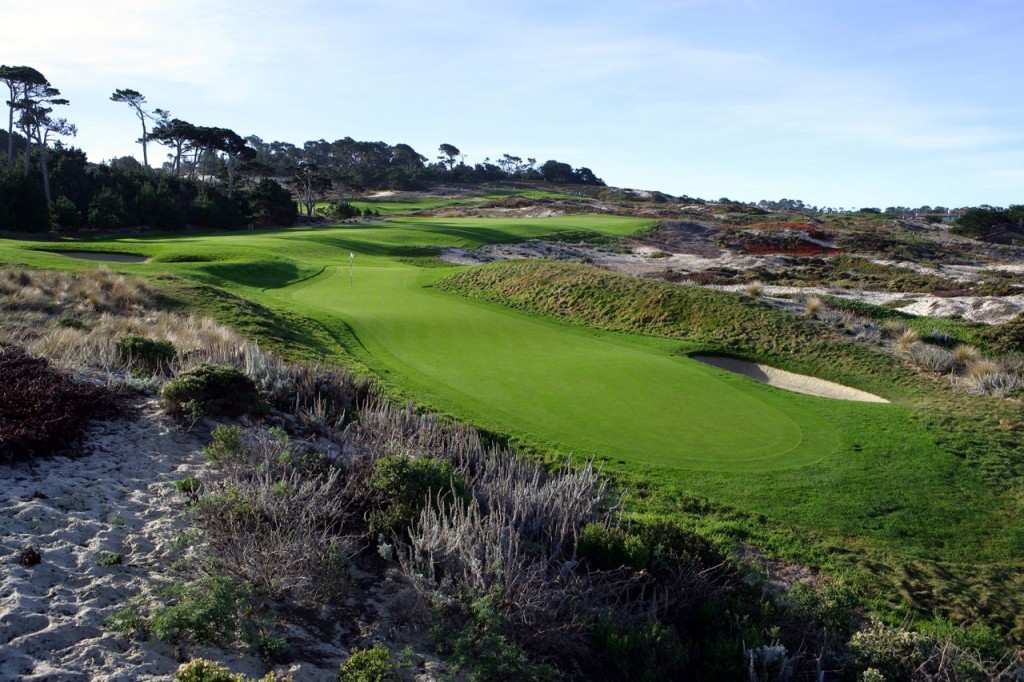 While I was out at Pebble Beach for U.S. Open media day (see my earlier report here), I had the pleasure of playing two other courses of nearly-as-great renown: Spyglass Hill and Pasatiempo. It’s been a few weeks, but such is the power and beauty of both layouts that I recall them very well and very fondly.

I’m tempted to say Spyglass needs little introduction, but it actually may require re-introduction if you’ve not seen it in the last decade. I hadn’t been since 1992, and what I remembered were lovely opening oceanside holes followed by a long, claustrophobic slog through dense forest. I’m glad to say that after significant tree work and some Tom Fazio tweaking of bunkers and the like in the early 2000s, Spyglass is a much more memorable and merry adventure. 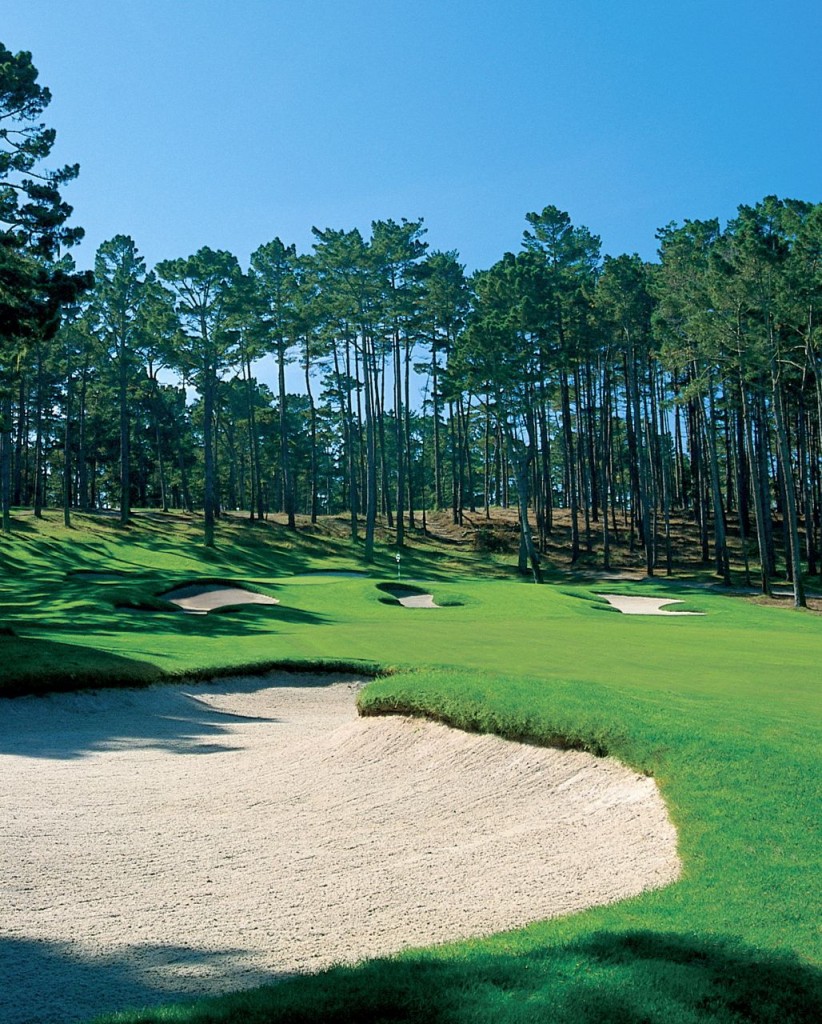 The first five holes do play by the ocean and are among the most beautiful anywhere with their mix of sea, sand, and scrub. After the long par-five first, which begins in the tall trees and heads down to the water, the next four holes are relatively short: 350, 165, 370, and 200, but often buffeted by wind and distractingly beautiful. The par-four fourth (shown above) presents countless options off the tee to set up the approach to the long, angled, dropped green. The Spyglass website (worth checking out for course info and photographs) says number four was architect Robert Trent Jones Sr.’s favorite par-four, and its green the course’s most photographed. Makes sense to me on both counts.

Beginning at the sixth hole, which turns away from the Pacific, the course climbs into the Del Monte Forest and resembles North Carolina as much as Northern California. My two-decade-old memories were of trying to thread shots through tall trees, over ponds, and past sand. Those challenges still remain although trees have been thinned and removed so it is possible to swing away. And despite being nearly 20 years older, I found the walk easier than remembered. (Thanks to a recent irrigation overhaul, Spyglass drains much better than it used to, isn’t a swamp after a light rain, and plays harder and faster.)

Over the years, the PGA Tour pros who play Spyglass during the AT&T always found something to complain about (as they are wont to do). Ignore them: If you’re at Pebble, Spyglass should not be missed. And if your game needs some help, the Pebble Beach Golf Academy, run by one of the game’s great teachers, Laird Small, is located on-site: Say hello and consider picking up a copy of his new book, Play Golf the Pebble Beach Way: It will help you play better there and elsewhere. 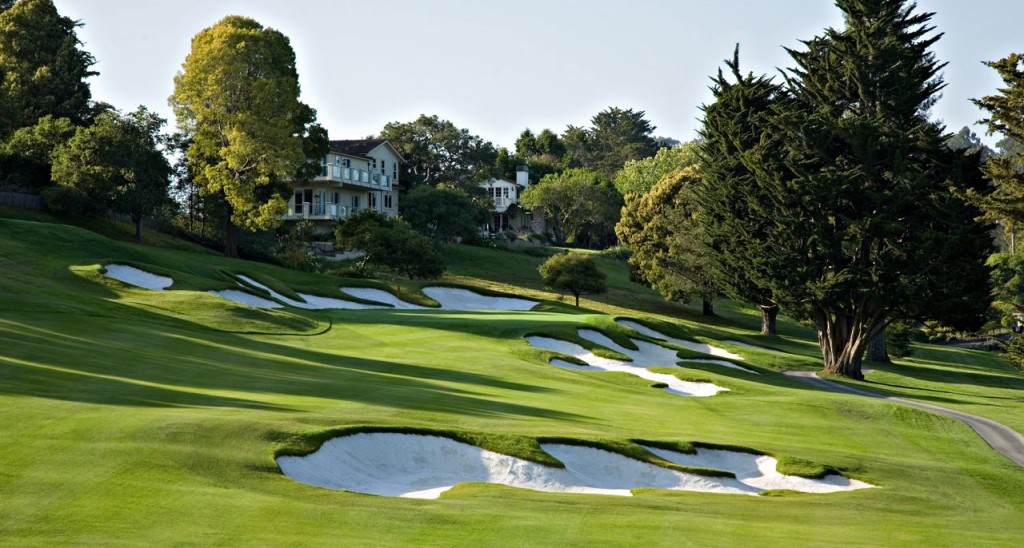 About 30 miles north of Pebble Beach, located just outside Santa Cruz, is Pasatiempo Golf Club. Designed by Alister MacKenzie in 1928-9 (he actually lived the last few years of his life in a house along the sixth fairway; there’s a plaque set in the cart path about 100 yards short of the green), Pasatiempo has numerous claims to fame. It was built by Marion Hollins, one of the country’s first female entrepreneurs and sports legends (Women’s Amateur champ in 1921 as well as a leading equestrian and polo player); her aim was to create the best course west of the Mississippi and 80 years later it still contends. She was familiar with MacKenzie’s work at Cypress Point (he credited her with choosing the location for Cypress’s famous par-three 16th), and it was after seeing these two courses that Bobby Jones asked MacKenzie to help him design Augusta National.

Pasatiempo is open to public play and an absolute delight. Even if you’ve only seen Augusta on television you’ll recognize MacKenzie’s bunker and green designs (there are great photographs on the website), especially on holes like the incredible 215-yard par-three 3rd (shown above). Some of the look has benefited by a recent Tom Doak renovation, and the website features fascinating before and after photos. Work along the edges of the course is bringing back natural grasses and transition areas. I can’t wait to return when it’s done. 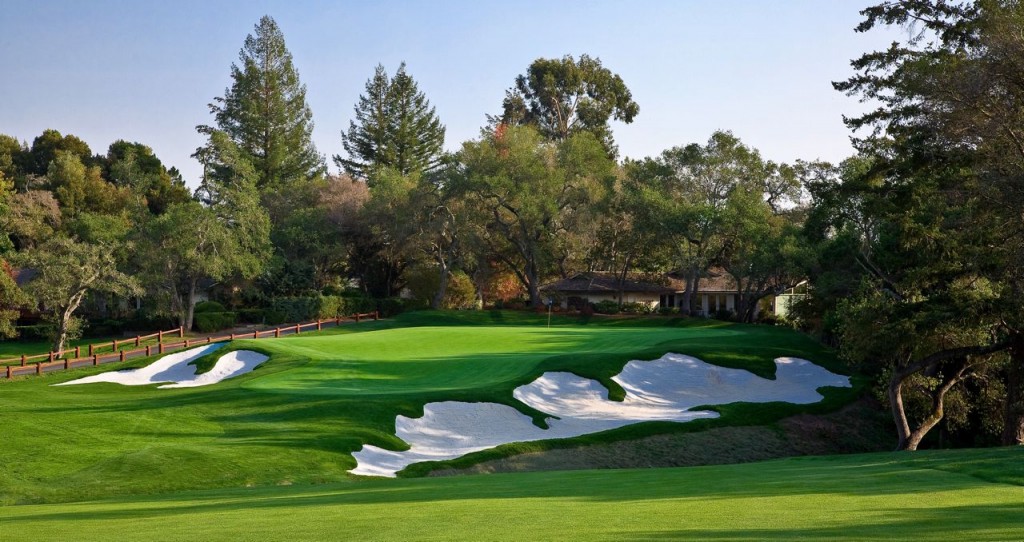 The rolling terrain, shaping of fairways, insidious greens (as wicked as any I’ve ever seen—think Augusta!), and need to properly position every shot make Pasatiempo an outstanding day and a great history lesson. No surprise it always ranks high on lists of public-access courses and is number 29 on GolfWeek’s most recent ranking of “classic” courses. Houses loom menacingly close on a few holes, as the photos here show, but they’re minor visual distractions rather than hazards.

Should you need any further recommendation, note that I’ve made an image of the first hole (below)—looking from the elevated tee down the fairway to the Pacific and mountains beyond—the wallpaper on my iPhone. I smile every time I turn it on. 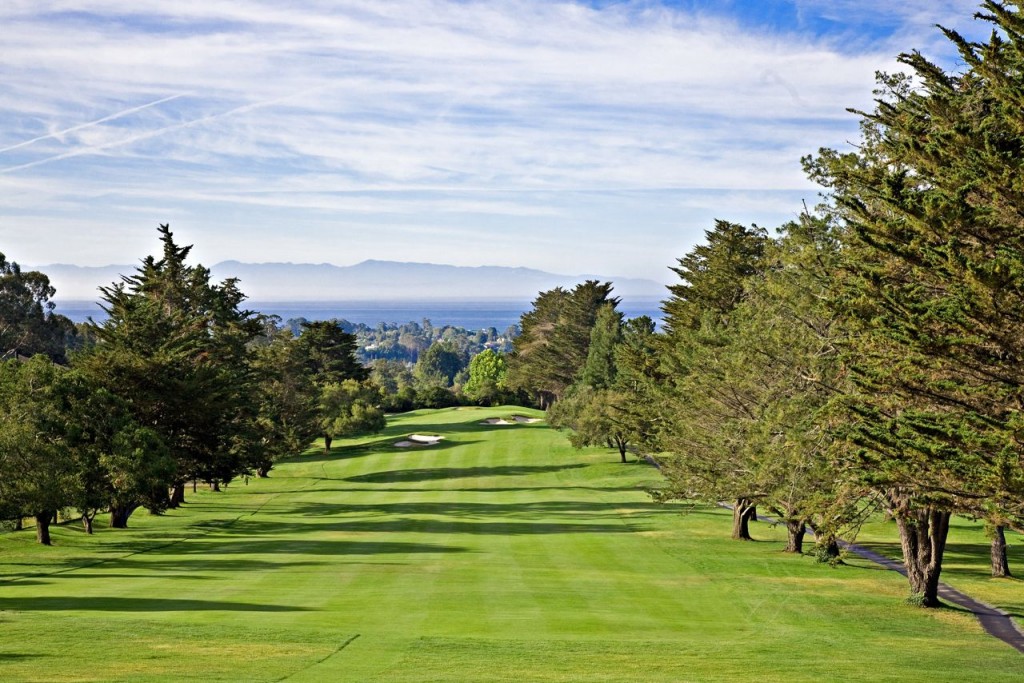 1st hole, Pasatiempo—and the wallpaper on my iPhone!