Oliver Sacks writes beautifully in a singular style yoking compassion and curiosity to the cool professional gaze of the trained neurologist. His periodic collections of essays, including the latest, “The Mind’s Eye,” are unfailingly wise, humane and edifying. And Sacks must also be among the last practicing physicians in America making house calls. 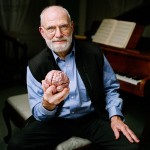 When you read about the various perceptual dilemmas they face, however, you can understand why Sacks prefers to see his patients in settings where they’re comfortable. Imagine, for example, losing the ability to identify even simple objects, as one of Sacks’ patients, Lilian, an accomplished concert pianist, did. She also could no longer read words or music, the consequence of a condition with a slow onset of symptoms called posterior cortical atrophy, or PCA.

“People with PCA,” Sacks notes, “tend to experience complex visual disturbances. Their visual disorientation may become profound: Some patients get lost in their own neighborhoods or even their own homes.” He describes placing small objects in front of Lilian during a diagnostic session and describes her often-puzzling stabs at naming what she’s seeing. Shown a “small plastic model of a wolf, she exclaimed, ‘A marvelous animal! A baby elephant, perhaps?'”

There is poignancy in these tales, an underlying melancholy that’s often redressed, in Sacks’ telling, by the courage and resilience of his patients, their ability to struggle against or even overcome seemingly intractable conditions. Most of the essays begin with a description of the symptoms of a single patient, then amble out across the larger philosophical terrain suggested by the presenting symptoms, before returning to a final observation about the outcome of this particular patient’s illness or condition.

Some of Sacks’ patients, for example, cannot distinguish one human face from another. This condition, called prosopagnosia, usually has a genetic basis, but occasionally has a later onset in people suffering strokes or other brain injuries. Sacks has perhaps more than his usual empathy for patients suffering from prosopagnosia because he, too, is prosopagnosic and often fails to recognize even his closest associates.

“My problem with recognizing faces,” Sacks write, “extends not only to my nearest and dearest, but also to myself. Thus on several occasions I have apologized for almost bumping into a large bearded man, only to realize that the large bearded man was myself in a mirror.”

Sacks mentions in a characteristic aside that his friend Chuck Close, an artist “famous for his gigantic portraits of faces, has severe lifelong prosopagnosia.” In a profound act of compensation for this perceptual deficiency, Close’s paintings make flat images that are compelling representations of an alternative reality.

Patients with prosopagnosia are often unable to recognize places and other things as well, Sacks writes, suggesting a neural link between the two conditions. Scientists studying prosopagnosia and the more general condition of visual agnosia have also identified “super-recognizers” — “people with extraordinarily good face-recognition abilities.” Reading Sacks’ descriptions of how “super-recognizers” see the world, I realized that I fall pretty far-out on the bell curve in this regard, and remember for years faces I have encountered fleetingly. I can also identify people from various angles and abbreviated views — what one super-recognizer called “a slim wedge of face.”

Sacks also writes about his own illness — a melanoma in his eye. The turn toward philosophical digression is pointed here, as he contemplates his own mortality. All of Sacks’ essays consider what it is that makes us not only human but persuade us that there is also a persistent and enduring self that is somehow real. But brain injuries especially show how fragile our “true selves” are — how what goes on inside our brains is a rich amalgam of processes that somehow moves through time and space with our physical bodies while preserving a deep and persuasive sense of continuity.

Sacks is a singular figure in the literary firmament, able to cherish and explain to laymen the hard-earned discoveries of scientific enquiry at the same time he is able to marvel at the inexplicable concatenation of accidents and contingencies that defines individual lives. “The Mind’s Eye” is a welcome addition to the rich repository of Sacks’ collected works.